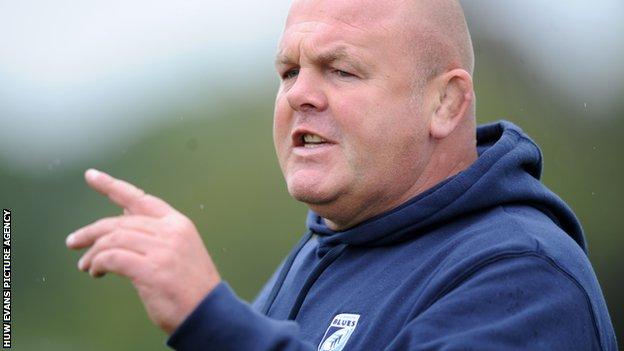 Coach Justin Burnell insists Cardiff Blues are not in crisis despite a recent poor run of form and players departing the region.

The Blues have lost their last five games in all competitions, including a heavy Heineken Cup quarter-final defeat against Leinster.

Twelve players, including Wales prop Gethin Jenkins and Wales scrum-half Richie Rees will leave at the end of the season but Burnell denies the region are in crisis.

"I think that's an easy word to use," said Burnell.

"Cardiff Blues are a fantastic establishment. They're a world name in rugby.

"I don't think a run of five games and some players leaving is a situation where it's a major crisis."

The duo were given until the end of the current season to make the mark but the Blues have confirmed they they intend to appoint a director of rugby to work above the current coaches.

"Obviously whatever job you're in people will have an opinion," said Burnell.

"Myself and Gareth are contracted until the end of next season. If the new director comes in and feels he wants to bring his own staff in, that is obviously his priority.

"All we will be doing when we report back into work will be giving our utmost support to the director of rugby and to Cardiff Blues."

Sunday's Pro12 game against Edinburgh at Cardiff City Stadium will mark the final home game for a number of prominent players.

As well as Jenkins and Rees, Martyn Williams, John Yapp and Dan Parks are among the players leaving the region at the end of the current season.

But Burnell says there will be no room for sentiment as the Blues to end their home campaign on a winning note.

"In all fairness they're professional players," said Burnell. "Their approach, like it is to any other game, is to go out and give a good performance.

"Their total focus is to do the fans proud and get the win for them.

"We do need that win and we will be going in to it wholeheartedly to get that result."