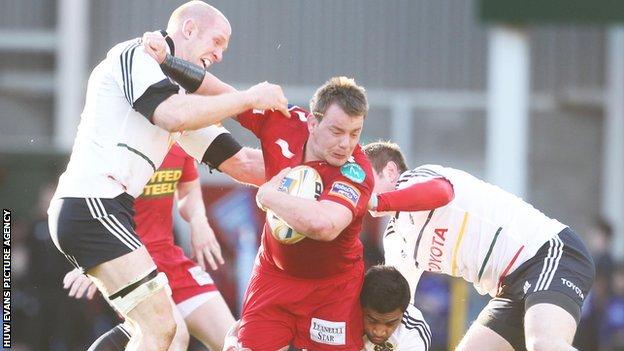 Scarlets and Munster battled to a compelling Pro12 draw that delivered a blow to the hosts' play-off hopes while ensuring the visitors will challenge for the end-of-season honours.

Nigel Davies's side went from 17-7 down to the brink of victory, but Munster held firm.

Sean Lamont went over for arguably the Pro12 try of the season early on, but Donncha Ryan and Simon Zebo hit back.

Aaron Shingler touched down before Rhys Priestland levelled with the boot.

With one round Munster are expected to travel to face the Ospreys in the play-offs.

But the Scarlets must rely on either Treviso damaging fourth-placed Glasgow's hopes on Sunday and/or Connacht playing a similar role in the regular season's final round on Saturday, 5 May.

In that last round the same time the Scarlets will be hosting Welsh rivals Cardiff Blues, hoping to find the killer instinct that helped deny them victory over Munster.

Lamont's try will live long in the memory of all those who witnessed it.

Scrum-half Gareth Davies began the move in the shadow of his posts and after Liam Williams, George North, Stephen Jones, Shingler and Matthew Rees played their parts, the Scottish wing went over at the other end.

Priestland converted, but the Scarlets' lead was short-lived.

Donncha Ryan took Munster into the lead and Keatley added the extra points before sending a penalty between the sticks.

The Scarlets' reward for endeavour came when Priestland kicked penalty to leave the hosts trailing by seven points at the break.

Keatley restored the 10-point difference after 55 minutes, but back came the hosts as Shingler took Stephen Jones' pass to step through the defence and power away.

But there was no more give in the Munster defence despite the Scarlets' determined attacks in which Shingler, North and man-of-the-match Adam Warren were prominent.