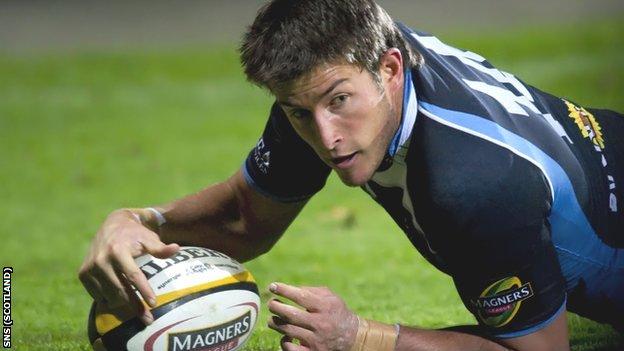 The Scots are fourth in the table - the final play-off berth - with only a home game against Connacht to come on 5 May.

Glasgow found themselves trailing to a Brendan Williams try after 11 minutes.

Not only did the victory strengthen Glasgow's play-off hopes, but it avenged their defeat by Treviso at Firhill in September.

The teams could scarcely have gone into the match with a greater contrast in form.

Last Saturday's 35-29 loss at Munster was only the Warriors' second reverse in their last 16 league outings, while the Italians had won just two of their last 13 matches in all competitions.

Their win at the Dragons last weekend, however, was a warning to Lineen's side.

Williams opened the scoring when he found space in midfield and was unstoppable down the right wing, with Chris Cusiter's despairing dive at his ankles adding to the dramatic effect.

Some solace was to be found in the missed conversion.

But that early try was not the only element Glasgow were not expecting, thanks to some heavy downpours.

With the thunderous clouds came darkening moods, but as tempers flared the visitors were awarded a penalty for a Treviso infringement.

Stand-off Weir knocked his kick through the posts midway through the first half to make it 5-3.

Ball-handling and the ability to stay upright were fast becoming key factors in the worsening conditions as errors and scrapping disrupted the tempo.

Treviso scrum-half Edoardo Gori and Glasgow captain Al Kellock were sin-binned for their incendiary roles in one such melee after half an hour.

The first half, though, petered out.

Weir, a few metres from his own try-line, had a clearance kick charged down five minutes into the second half, while Stuart Hogg, 19, was one of a few in dark blue to make last-ditch tackles to repel the subsequent green-and-white charge.

Treviso were camped in the Glasgow half, charging down the Scots' kicks but opting for set-pieces rather kicks when awarded penalties by referee Leighton Hodges.

Burton screwed a wind-assisted drop-kick narrowly wide for the hosts, just before Henry Pyrgos took over from Cusiter and sunshine replaced the rain.

Hogg cut through the opposition and, with support from Pyrgos and fit-again Graeme Morrison, Alex Dunbar came within five metres of the line before being tackled.

Weir knocked over a tricky penalty on 58 minutes to edge Glasgow ahead and the narrow score was highlighted by Burton's enthusiasm to attempt drop-goals.

Italian pressure paid off when Burton's penalty, with five minutes to go, gave them an 8-6 lead.

Replacement Ruaridh Jackson had the chance to be the Glasgow hero in the dying minutes, but his long-range penalty cannoned off the upright.

But moments later, in his first action since a World Cup injury, van der Merwe tore through the Treviso defence for a vital try and Jackson added the extras.

A point against Connacht should be enough to end fifth-placed Scarlets' hopes of catching the Warriors.