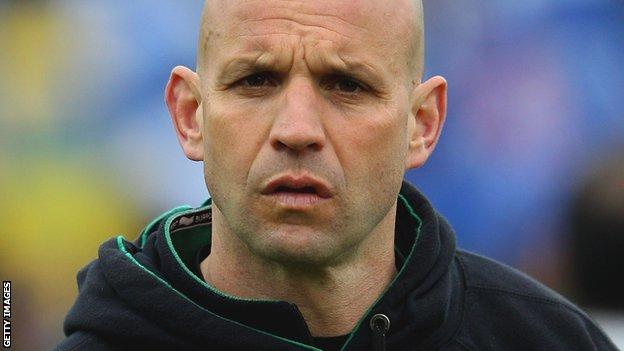 Northampton Saints director of rugby Jim Mallinder says his side must beat Exeter this weekend to have a chance of reaching the Premiership play-offs.

The two sides are competing for the final spot in the play-offs at Sandy Park on Sunday.

Mallinder told BBC Northampton: "There has to be an edge. We have Worcester at home last game of the season and we want something to play for.

Saints have reached the Premiership play-off semi-finals in the previous two seasons.

They slipped behind Exeter in this campaign after a 21-35 defeat to East Midlands rivals Leicester Tigers at Franklin's Gardens, while the Chiefs secured a late, bonus point win at Worcester.

"The players knew immediately after the [Tigers] game we didn't play to our best," said Mallinder.

"We always said it would be a difficult season. The World Cup hasn't helped us and we had a poor start. We recovered and now we're fighting for that top four.

"It will be satisfying if we can pull off [a win]. Exeter have talked about being underdogs all along and they've gone quietly about their business very well.

"Last year they beat us convincingly [at Sandy Park] with our international players away and they'll be playing full of confidence. It's going to be very, very difficult."