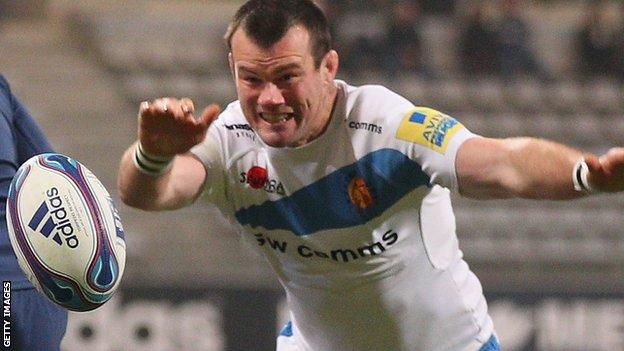 Exeter captain Tom Hayes says Northampton will be one of the Chiefs toughest-ever tests when they face each other on Sunday.

If Exeter win they will get a place in the Premiership play-offs in just their second season of top-flight rugby.

"They play with a lot of intensity and a lot of physicality and it's something we'll have to match if we want to get anything out of the game."

Hayes will be making his 100th league appearance for the Chiefs since joining the club from Plymouth Albion in the summer of 2008.

And the Irishman, who signed a new deal earlier this year, says the opportunity of a play-off place shows how far the club has come.

"This weekend is effectively a Premiership quarter-final and it's certainly made an interesting finish to the season.

"We could go all the way to the top, but there's no saying we will.

"It's not something we necessarily focus on too much, we just want to keep getting better as a rugby team and we've done that over the past couple of seasons.

"No matter what happens over the rest of this season, we're going to finish in a better position than we were in last year so that's a positive."

And Hayes say that even though they have progressed on last year's achievement, the squad want to try to go even further.

"Our ambition is all that's going to motivate us for the rest of the year because we've already reached our goals of just getting better.

"It's just down to trying to win a game of rugby at the weekend and hopefully with results going the right way we will be in the top four.

"A lot of people might not have expected us to step up to the mark, coming out of the Championship, but we're fairly happy with how it's going at the minute."