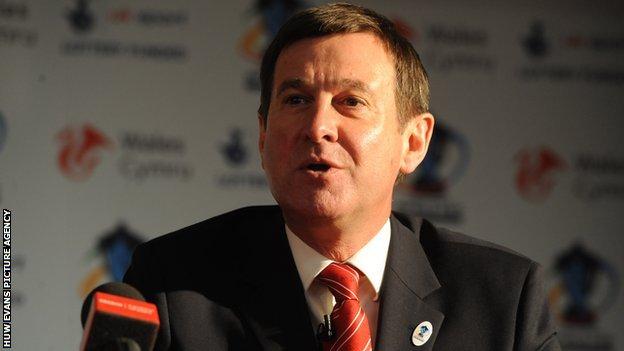 In a proposal to the WRU, Valleys Rugby (VR), backed by Pontypridd MP Owen Smith, have said they can set up a team with an annual £1.6m playing budget.

Lewis said: "I'm slightly alarmed by the contents of the [VR] report."

Valleys Rugby's campaigners hope their proposed team would play most of their home games at a revamped Sardis Road, home to Welsh Premiership club Pontypridd.

Their proposal comes at a time when the four professional regions are bracing themselves for a future without a host of established international players.

The Blues are losing 11 capped internationals, including Wales and British and Irish Lions prop Gethin Jenkins and former All Blacks backs Casey Laulala and Ben Blair.

Neighbours Dragons will see Wales stars Luke Charteris and Aled Brew leave, while the Ospreys' departees will include international wings Nikki Walker and Tommy Bowe, and Shane Williams is retiring.

The departures of Stephen Jones, Ben Morgan and Sean Lamont from Scarlets have also been confirmed.

WRU chief executive Lewis said: "I've received the report and I've replied to the people who've provided us with the report saying that we're now going to analyse it properly and we'd like them to come and present to us.

"But I must admit I'm slightly alarmed by the contents of the report.

"There's one number that jumps out, which is a playing budget of £1.6m.

"But I think I've given you a hint of what's contained within it."