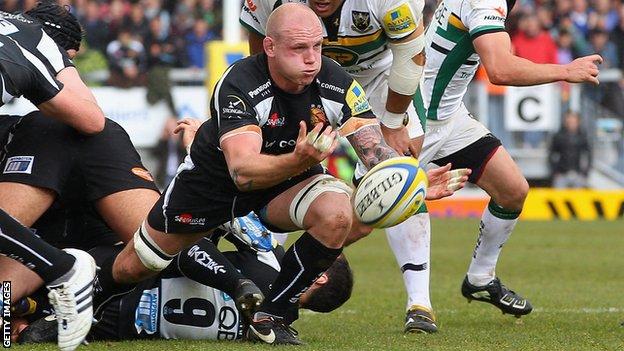 Exeter head coach Rob Baxter says his side's poor game management was why they did not beat Northampton.

Chiefs needed four points to guarantee a play-off spot but an 18-15 defeat means they must win at Saracens to have any chance of making the top four.

"I'm disappointed with the way we let the management of the game slip in the second half," he told BBC Radio Devon.

"We didn't get tempo into the game when we had the opportunity to do so, particularly in the first part."

Baxter added: "I think that would have made it a lot more interesting game.

"We tactically know how we have to play against Saracens so it'll be up to us to ram it home on the day.

"If we ram it home on the day, fantastic, you never know what can happen.

"But to be stood here talking about being really disappointed about losing a big game at the end of the season because we could have potentially got to a semi-final feels a little bit ungrateful for all the hard work the players have done."