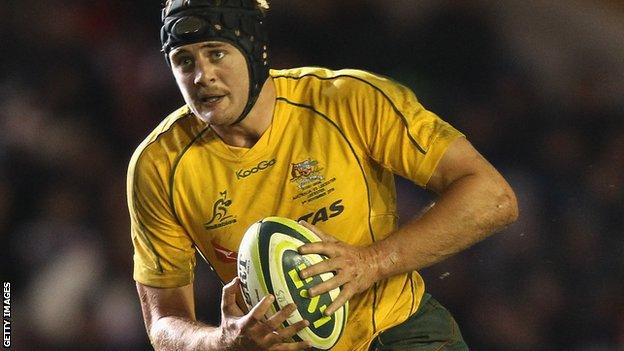 The New-Zealand-born forward, 27, has won 33 caps for the Wallabies and will move to Sandy Park at the end of the current Super 15 season.

"He's a very good signing for us and a very good player," Chiefs boss Rob Baxter said of his new acquisition.

"He is a back five forward coming into his physical prime," he added.

"We've looked at lot at him and we believe he has got a lot of ingredients that we want him to bring to the club.

"Personally, I think it's a great credit to what the players have achieved this season - and where we are as a club right now - that a guy of that standing wants to come and play his rugby here in Exeter."

Exeter have been looking to bolster their options in the second row because Peter Short is quitting the game after failing to recover from a broken leg and Chrs Bentley is also retiring.

"There is no way you can go into either a Premiership or Heineken Cup campaign with only three frontline second rows, which is where we are at the moment," said Baxter.

"The arrival of Dean will takes us to four, but I'd say we're still a little light in terms of the back five, so we may well add another couple of people in that area."

Mumm, who captained the Australian national team in 2009, featured in Saturday's 30-21 win for the Waratahs against the Melbourne Rebels and was an ever present for his side last season.

He is the second international to join Exeter after Irish centre Ian Whitten committed to moving to Sandy Park from Ulster last month.

The club have also signed front-row duo Alex Brown and Jack Yeandle from Championship side Doncaster.