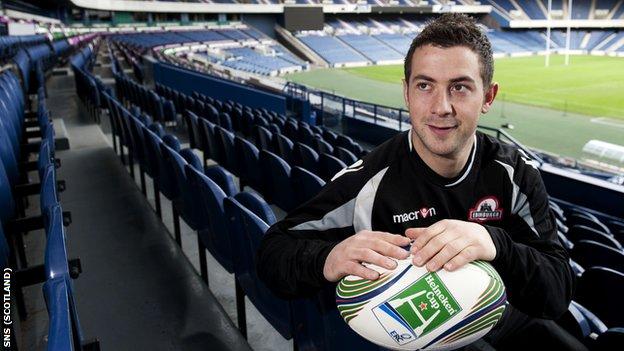 Captain Greig Laidlaw has urged his Edinburgh team-mates to book their place in the Heineken Cup final.

To do so, the Scots will have to beat Ulster in Dublin on Saturday.

"The quarter-final win over Toulouse is the team's benchmark in terms of performance. That is our starting point," he said.

"We've shown we're capable of delivering on the big stage and this is our latest test."

Laidlaw was instrumental in Edinburgh's quarter-final victory; creating the opening try and producing a superb kicking display to help the Scots seal a 19-14 win at Murrayfield.

And he said Edinburgh would have to raise their game once again to progress to the final at Twickenham on 19 May.

"We are all well aware that we must be at our absolute best, physically and mentally, if we are to have a chance of making the final," he said.

"There's a lot of excitement among the fans about heading across to support us; whether it's by car, bus, ferry or plane.

"The supporters have been incredible and we'll be doing everything we can to give them something to shout about.

"The Murrayfield crowd and the noise they created in the quarter-final was incredible, from start to finish, but towards the end of the game they were just amazing and they should all take pride in the part they played in the win that day."