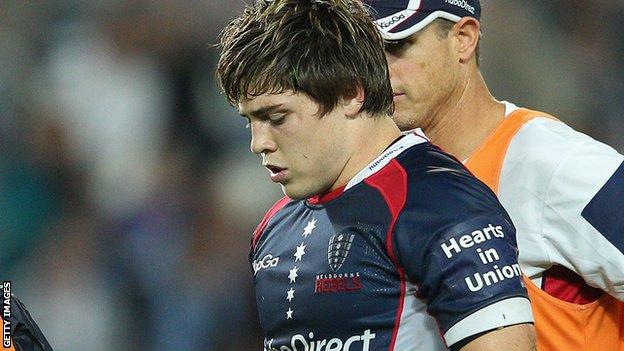 Australia and Melbourne Rebels' utility back James O'Connor is out of the Test matches against Scotland and Wales in June due to a lacerated liver.

O'Connor, 21, took an accidental knee to the ribs during a Super 15 loss to the Waratahs in April.

After a scan, he said on Twitter: "Disappointing result. Liver healing very nicely, just going to run out of time.

"If only I had a couple more weeks up my sleeve."

The Wallabies face Scotland in Newcastle on 5 June before taking on Wales in a three-match series, starting in Brisbane on 9 June.

In O'Connor's absence for the Rebels, and following Danny Cipriani's release to join Sale Sharks, Kurtley Beale has been impressive at fly-half.

Beale has made his reputation at full-back for the team that has recently been led by Welshman Gareth Delve.

But he kicked a late winning penalty in their 32-31 win against Western Force on Sunday, 20 May.

Quade Cooper is also back in contention. He survived 40 minutes as Queensland Reds beat the Lions 34-20 at the weekend, to complete his recovery from ruptured knee ligaments.

Australia coach Robbie Deans will be without Reds centre Ben Tapuai, who has been sidelined by a broken collarbone.

The 23-year-old, who made his Test debut against Wales in Cardiff in November, has had surgery and is highly unlikely to play any further part in the Reds' 2012 Super Rugby campaign.