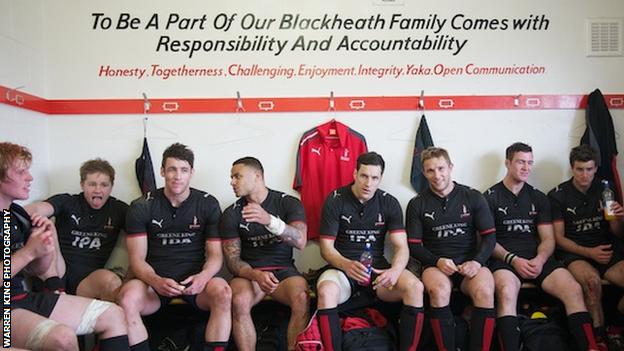 Blackheath captain Tom Bason says the club will not be the obvious force in the National League One next season.

He told BBC Radio Kent: "I don't think we'll go into it as favourites because there are a lot of clubs with bigger budgets.

"If we can play as we are now, we can be a very difficult team to beat whoever we're playing."

A club record 10 straight wins have sent Blackheath to a season-high third place with one game remaining.

Bason added: "Certainly, if we can hit the form, the fitness and the place we're in at the minute, we could certainly have a very good run next season."

Club have smashed their own club record for consecutive league victories in their barnstorming finish to the season, scoring 408 points in the process.

But it was a team meeting after they lost three on the bounce around the turn of the year that prompted their recent run of form, according to Bason.

"The Cinderford game was a bit of a watershed for us," he said. "We had a good sit down after that game and questioned our work ethic.

"Since then, we've just worked really, really hard and once we got on this roll, we've been relentless.

"We got ourselves in a good place mentally, continuing to work hard during the week, and work hard on a Saturday."