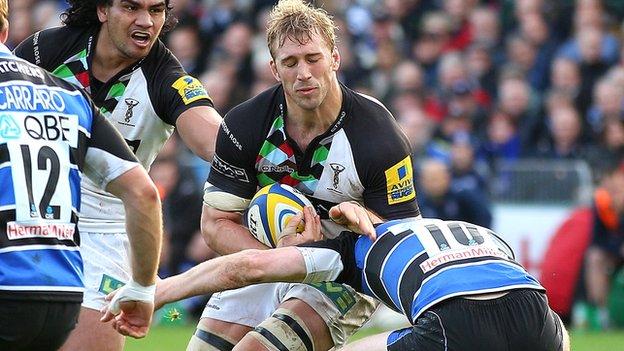 England and Harlequins captain Chris Robshaw has been nominated for the Premiership Player of the Year award.

The England flanker is one of three back row forwards to make the shortlist of six, alongside Leicester's Julian Salvi and Exeter's James Scaysbrook.

Leicester's Richard Cockerill, Exeter's Rob Baxter and Quins' Conor O'Shea are up for Director of Rugby of the Season.

The winners of both awards will be announced on 8 May.

Who's in contention for Player of the Year?

Robshaw tweeted: "Extremely proud to be nominated for Aviva player of the year and great to see @mikebrown_15 there as well."

Robshaw will be hoping to follow in the footsteps of fellow England flanker Tom Wood, who won the 2011 award for his performances for Northampton Saints.

The England captain has led Harlequins to the top of the Premiership with one round of the regular season to play, while Brown has been a consistent threat from full-back for the Londoners this season.

Brown is the only player on the list to have also been nominated for the ERC European Player of the Year award.

Australian flanker Salvi has marked his first season for the Tigers with five tries and consistent performances, while Chiefs back row Scaysbrook has helped Exeter cement a place in the top half of the table.

And Wood's nomination comes despite him being ruled out for the season in March following surgery for a pectoral injury.

Northampton director of rugby Jim Mallinder currently holds the coaching award, but has not made the list this time.

O'Shea's Harlequins have led the Premiership for close to the whole of the season, but now have Cockerill's Tigers hot on their heels after a run of seven straight league wins and nine in all competitions to lift the LV= Cup.

Meanwhile, Baxter has inspired Exeter to a Heineken Cup place in only their second season in the Premiership.

The Chiefs also go into the final round of league fixtures with an outside chance of clinching a top-four finish and a play-off spot.