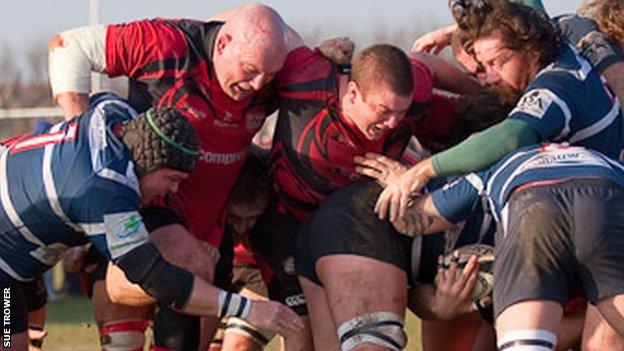 Jersey player-coach Ben Evans believes the side will be good enough to survive their first season in the Championship.

The former Wales international prop has a year left on his contract and will be part of the squad next season after they were promoted from National One.

Evans says he and director of rugby Ben Harvey have been planning for promotion since Christmas.

"Ben's been doing a great job on the recruitment side and Jersey is now a team where people want to come to us."

Evans told BBC Radio Jersey: "The emails and CV's that have been coming through is incredible, Jersey Rugby Club is going places and we want to be part of this."

The island side is a mixture of full and part-time players from the island and imported from the UK and overseas.

And while Evans expected the club's professional players to perform up to National One standards, he says he has been impressed by how well the squad's home-grown talent has stepped up to the rigours of high-end rugby.

"It's great to see some of the Jersey talent who've come on leaps and bounds like Myles Landick and Michael le Bourgeois.

"It's amazing and so satisfying to see the young Jersey talent coming through.

"It's a very cosmopolitan team, it's a nice mix. We socialise together, we all get on together, there's no individual in the team. I don't think the team would allow it and that's what makes us so strong together."