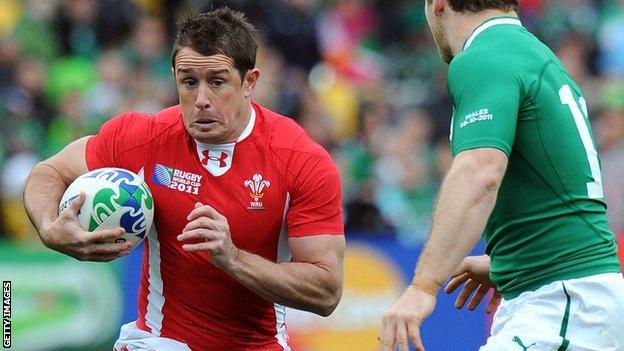 Shane Williams has called for the Welsh Rugby Union (WRU) to step in and help stop the player drain of Welsh stars to France and England.

Welsh rugby has seen a raft of players leave after being offered big pay days the regions cannot compete with.

"I do think there has to be some involvement with the Union," said Wales' record try scorer, who will retire at the end of the season.

"At the end of the day, we want to keep our players in Wales."

It is a very difficult place at the moment, not just in Welsh rugby, but in Wales economically

The Ospreys wing, who was named IRB Player of the Year in 2008 and retired from international rugby in December 2011, has seen a host of former Wales team-mates sign for clubs outside Wales.

"There needs to be some kind of commitment from the Welsh regions and the WRU," added Williams.

"There needs to be a happy medium because as far as supporters are concerned, we just want to see Wales successful as a national side and the regions doing well in Europe and the RaboDirect Pro 12.

"It is a very difficult place at the moment, not just in Welsh rugby, but in Wales economically."

The four regions - Cardiff Blues, Newport Gwent Dragons, Scarlets and the Ospreys - have announced a salary cap of £3.5m which will begin at the start of the 2012-13 season, a move which has been welcomed by the WRU.

The four regions and the WRU have also commissioned a financial review by accountancy firm PricewaterhouseCoopers to address the ongoing financial problems and the dwindling attendances watching the regions.

"The Welsh regions appear to obviously have a problem financially, having said that, the problem is how much finance there is in the French clubs," said Williams.

"That makes it very difficult for players to turn down these offers.

"Even the English clubs are coming in with the big offers which makes it very difficult for the regions to keep hold of these guys.

"It's tough for the regions and they are certainly finding it very difficult to compete and because of that they seem to be struggling on the field."

But Williams also offered a strong defence of nearly a decade of regional rugby in Wales despite claims it has failed to capture the public's imagination.

"It has worked," added Williams. "People are asking that question because the Welsh regions haven't been successful in the Heineken Cup, but the Heineken Cup is a tough, tough competition.

"Since the regions were formed, the national side has certainly benefited, we have played some great rugby, won some championships and Grand Slams.

"So something has to be working. Yes, it's been 10 years and there haven't been any Heineken Cup wins but I have no doubt that will happen in the future."