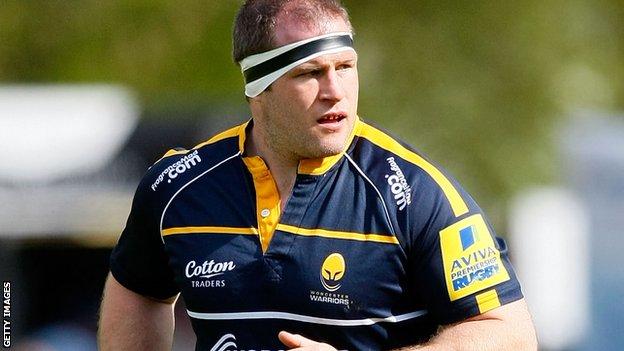 Bristol have brought in four new players for next season's campaign.

Scotland international prop Bruce Douglas, 32, has been with Worcester Warriors for the past two seasons while centre Bryan Rennie, 28, arrives from Exeter Chiefs.

Fly-half Adrian Jarvis, 28, makes his return to the Memorial Stadium after spells with Leeds and London Irish.

Bristol embark on the play-off finals phase of the season on 5 May against Cornish Pirates.

Should they win they will face either Bedford Blues or London Welsh in the two-legged final for a place in the Premiership.

The West Country side finished the regular season seven points clear at the top of the table and are the only team in the final four that meet the Premiership's entry criteria.

"He's a very good attacking full-back with a long kick on him and he's the kind of full-back I want at Bristol.

"Bryan has stepped up to the Premiership in the last two years and is a big capture for the club.

Douglas counts Harlequins, Scarlets and Montpellier among his former clubs and has been capped 43 times by his country.

"Bruce is a very good prop," added Middleton. "I watched him play for Montpellier a few years ago and then he signed for Worcester and has done really well there.

"He has got a number of good years left in him. He's in fantastic physical condition and he can cover both sides of the scrum, which is what Darren [Crompton] can do."

Jarvis started his career with Harlequins before joining Bristol in 2008.

The former England Saxon left to join Leeds in February 2011 before signing for the Exiles last summer.