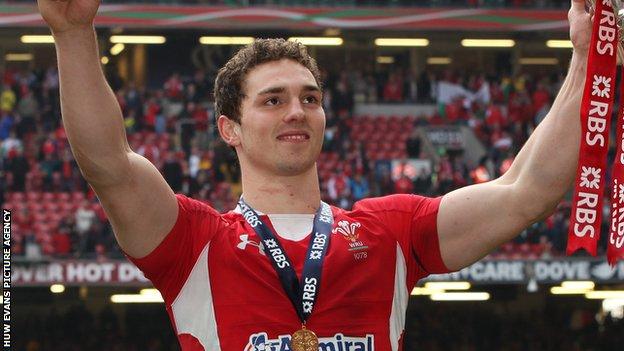 George North insists Wales are ready to build on Grand Slam success rather than lose the momentum as happened after the 2005 and 2008 successes.

The 20-year-old wing wants to keep the winning streak going on June's three-Test tour of Australia.

Wales face the Barbarians at Cardiff's Millennium Stadium on 2 June before heading to the southern hemisphere.

"I think we have been guilty in the past of just slowing down after a Grand Slam," said the Scarlets flier.

"But I think we have got the boys here now who are really keen to just push on and really achieve more.

"It seems with the quality we have, we can achieve more and cause more upsets.

"Australia are a hard team wherever you play them, but to go out Oz and have a go is going to be tough.

"But I think we have to push and see where we are as a squad.

"We have proved ourselves here in the Six Nations and we want to push ourselves against the best in the world and Australia are one of those teams.

"To go down there and to have three Tests against a strong Australia side is going to be a tough tour for the boys."

Shane Williams is set to be in the Barbarians side to face Wales in Cardiff, and North says that game will be crucial to their preparations for the three Tests against the Wallabies.

"I think the game is really important for whoever is picked for that game. It will be a tough one," said North.

"It's one you really want to try and put your hand up for because it's going to be a great tour to go on with the big three Tests and that first midweek match [against the Brumbies in Canberra]."

Wales will be forced to go to Australia without head coach Warren Gatland, who is recovering from a double heel fracture he picked up back home in New Zealand.

"It's obviously bad news for Gats [Gatland] but I'm sure Howler [Rob Howley] is going to do a good job as I'm sure the whole coaching staff will do," added North.

Meanwhile, North has insisted again he will be a staying in Welsh rugby and not joining the player drain to France.

"I'm happy where I am," he said. "I'm still contracted with the Scarlets for the next couple of years, so I can't really see my self leaving.

"I can understand why the boys would go to France. It's only a short career and you need to make as much as you can."