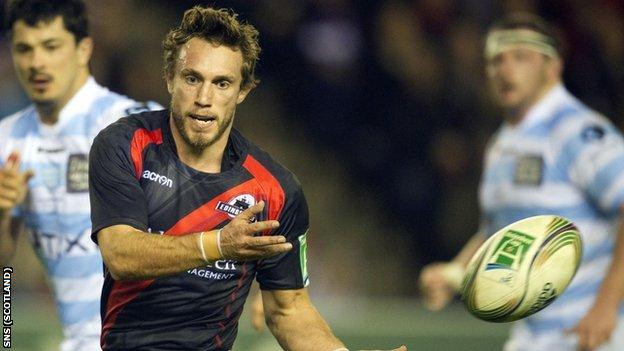 Edinburgh scrum-half Mike Blair has hinted at the tactics the Scots will use to try to defeat Ulster on Saturday to reach the Heineken Cup final.

"They are a really physical side, very aggressive. They have some big ball carriers in defence, some big hitters as well," said the 31-year-old.

"It's about manipulating the defence and not letting them get into the game, trying to upset their rhythm."

Michael Bradley's side take on their RaboDirect Pro 12 rivals in Dublin.

Blair hopes to round off a decade at Scotland's capital side by playing in the final in Twickenham in May.

He has promised to "give it everything" before he leaves the club at the end of the season, though he has not revealed where he will continue his career.

The Scotland international added: "We have done fantastically well to get to this stage of the competition.

In the Heineken Cup we have won six out of seven, which shows a level of consistency

"We are very satisfied with what we have done so far but we are also aware that there is a special chance on Saturday.

"Playing against Ulster, a team we are familiar with through the RaboDirect Pro 12, we are in a great position to put ourselves in a Heineken final."

Edinburgh will have to improve on their performances against Ulster this season if they are to progress.

A 42-20 loss at Murrayfield in January was followed by a 38-16 defeat at Ravenhill in March.

The team has won only five of their 21 league matches this season, but Blair believes their RaboDirect form has been shaped by head coach Bradley's inability to select a settled 15.

"In the Heineken Cup we have won six out of seven, which shows a level of consistency," he said.

"Because of the World Cup and the Six Nations we haven't had the opportunity to play a settled team in the RaboDirect while we have in the Heineken.

"I don't think you can compare the two competitions too much at this stage."