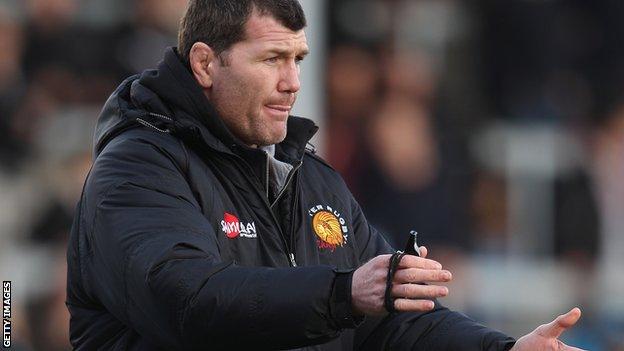 Exeter Chiefs head coach Rob Baxter says his nomination for the Premiership's Director of Rugby of the Season award shows how well the club has progressed.

Baxter has been nominated alongside Leicester's Richard Cockerill and Harlequins' Conor O'Shea.

Exeter have qualified for the Heineken Cup and pushed for a play-off place.

We have possibly overachieved this season. We haven't won anything yet and we've got to keep pushing to get better

Baxter's nomination comes as forward James Scaysbrook was nominated for the Player of the Year award.

"Awards like this are the culmination for a lot of people's hard work," Baxter told BBC Sport.

"It's great that we have been recognised for what we have done on the field, both individually and collectively.

"You get recognised when things go well, and it's great that James Scaysbrook has been nominated for Player of the Year."

But Baxter is doubtful that he will actually come away with the top prize, as the Chiefs, who also reached the quarter-finals of the Amlin Cup, have not won anything.

Although Exeter are set to finish at least fifth in the Premiership in just their second year of top-flight rugby.

Baxter led the Chiefs to promotion from the Championship in 2010 after taking over from Pete Drewett in the summer of 2009.

"It might seem to people to be a bit strange to win something without actually winning anything," he added.

"We have possibly overachieved this season. We haven't won anything yet and we've got to keep pushing to get better."