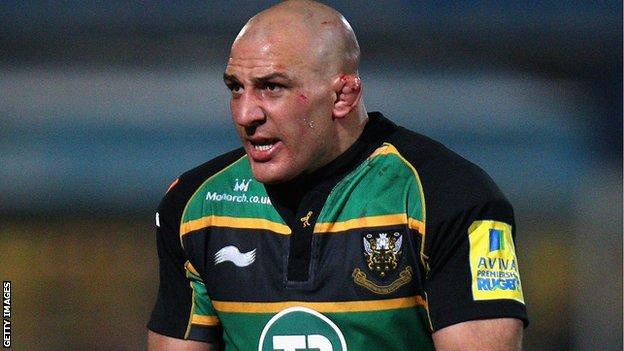 Gloucester have signed veteran hooker Andy Long from Northampton Saints for next season.

The 34-year-old, who has two England caps, has amassed 199 Premiership appearances during his 15-year career.

"We've got some young front-rowers and Andy's experience will be key in there," Cherry and Whites coach Carl Hogg told BBC Gloucestershire.

"We're delighted to get Andy's signature and looking forward to having him on board."

Having started his career at Bath, Long also counts Munster, Rotherham and Newcastle among his former clubs.

During his two-year spell at Franklin's Gardens, Long also worked as a coach at Cambridge and Hogg believes he can become a mentor to the youngsters in the Gloucester squad.

"He doesn't have that many miles on the clock in term of game time but he's got a wealth of experience, not just on a Saturday afternoon but Monday to Friday as well.

"That profile fits exactly what we want at Gloucester."

Meanwhile, Hogg also confirmed the club are hoping to send England Under-20 hooker Koree Britton out on dual registration next season.

"He's got huge potential and we'll look for him to play some regular rugby somewhere," added the Gloucester coach.

"It's key for young, developing players to get games rather than sit as second or third choice.

"It means we can still keep an eye on him and pull him back for A games and LV= Cup fixtures. He's very much a part of our thinking."