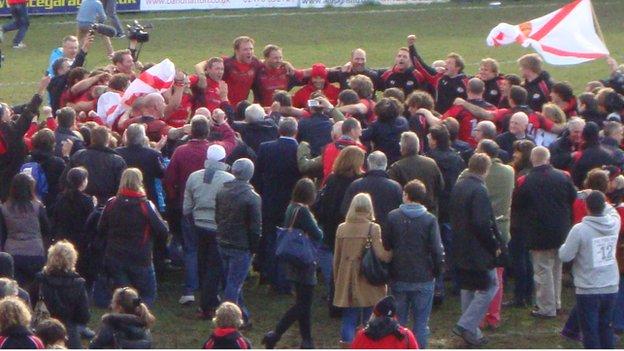 Champions Jersey are expecting their biggest ever crowd for a league game when they face Fylde in the final match of the season.

Former England skipper Bill Beaumont will present them with rugby's National One trophy after Saturday's clash at St Peter.

Jersey's average crowd has topped 2,000 this season, but club officials expect double that at the weekend.

He added: "We have around 850 sitting down for lunch so this all points to a bumper crowd, which we would anticipate topping 4,000.

"Advance purchase is recommended in order for spectators to minimise their queuing time."

The islanders sealed promotion to the Championship thanks to a 37-13 win at Coventry.

Jersey's biggest league crowd to date came in the top-of-the-table clash with Rosslyn Park in January when 3,648 flocked to St Peter to see the islanders go top with a narrow 20-18 win.

Gates open at 1230 BST on Saturday and there will be live commentary on BBC Radio Jersey.