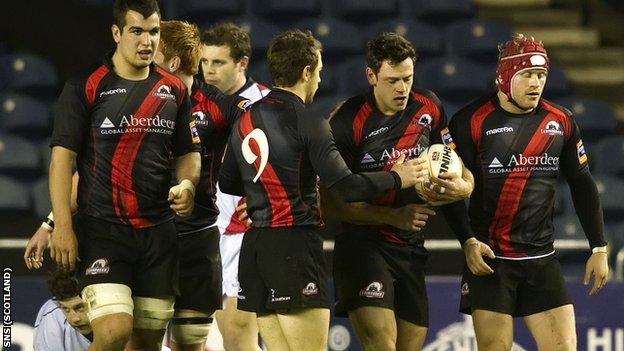 This is the first time a Scottish team have made it to the semi-final of the Heineken Cup.

Should Edinburgh beat Ulster in Saturday's game at the Aviva Stadium in Dublin it will be the greatest achievement by a Scottish professional side to date.

On the way to Dublin head coach Michael Bradley's team have accounted for London Irish, Cardiff and Racing Metro.

And in the quarter-final they attracted a Murrayfield crowd of more than 37,000, who saw an accomplished capital side overturn European giants Toulouse 19-14.

The manner of their progress has also provided their fans with some fast, exciting rugby, with the highlight of the group stages being the 48-47 home win over Racing Metro.

In that game Edinburgh were 24 points down with 20 minutes left - somehow they clawed their way back and ended up taking the spoils.

In previous years, Edinburgh would have failed to consolidate that excellent result at home: not this year. They travelled to Paris and won 24-27, with stand-off Phil Godman slotting a last-minute drop goal.

So, long-awaited success in the Heineken Cup, but it's a different tale when Edinburgh's league form comes into the equation.

They sit in the nether regions of the RaboDirect Pro 12, one place above bottom club Aironi. They have managed only five wins this season and have twice lost heavily to Saturday's opponents.

Recently, the club has announced some additions to the Edinburgh playing squad: former All Black Ben Atiga, the Welsh pairing of Richie Rees and John Yapp and the Georgian number 8 Dimitri Basilaia.

There is a common thread here: Edinburgh are acquiring ready-made experience to help to endure the travails of a hard, exacting league campaign.

This season, though, Edinburgh are a cup team, and that should give the travelling Edinburgh support some degree of optimism for the Ulster game.

When Michael Bradley fields his strongest side, Edinburgh can mix it with the big boys. They have also shown, particularly against Toulouse, that they can adapt and implement their game plans.

Ulster will start as favourites but, when it comes to a one-off game, it's anybody's.

As for the players, they fully understand that they are on the verge of creating Scottish rugby history.

Captain Greig Laidlaw and scrum-half Mike Blair are the brains of the operation. Laidlaw believes that Edinburgh can raise their game to make it to the final at Twickenham on 19 May.

"The quarter-final win over Toulouse is the team's benchmark in terms of performance. That is our starting point," he said.

"We've shown we're capable of delivering on the big stage and this is our latest test."

As for Blair, the Edinburgh and Scotland veteran will leave the club at the end of the season, but he thinks the team can secure a historic win.

"We are very satisfied with what we have done so far but we are also aware that there is a special chance on Saturday," he told BBC Scotland.

"Playing against Ulster, a team we are familiar with through the RaboDirect Pro 12, we are in a great position to put ourselves in a Heineken final."