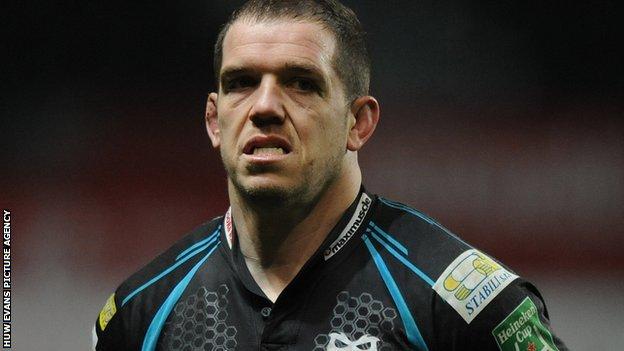 The 29-year-old, who has won 34 international caps, has been with the Ospreys since the inception of regional rugby in 2003.

He has made 177 appearances and scored seven tries for the Welsh club but found himself out of contract at the Liberty Stadium this summer.

"I feel I need a new challenge to keep developing my career," said Neath-born James.

"Bath is a very ambitious club and I'm excited by the prospect of being a part of that. The Premiership is one of the toughest leagues and I can't wait to get started."

James is one of a number of Wales stars leaving the region.

Hooker Huw Bennett has announced a move to France, Sonny Parker will join London Welsh while Shane Williams will retire.

A former Ospreys captain, James skippered the region to a historic victory over Australia at the Liberty Stadium in 2006.

Tommy Bowe,Nikki Walker and Tom Smith have also confirmed they will depart the region at the end of the campaign.

James, who can play at loose-head and tight-head, made his first Wales appearance against Romania in 2003 but had to wait six years for his second cap, against New Zealand in Cardiff.

He featured for Wales at last year's World Cup in New Zealand and was also a member of the 2012 Grand Slam winning squad.