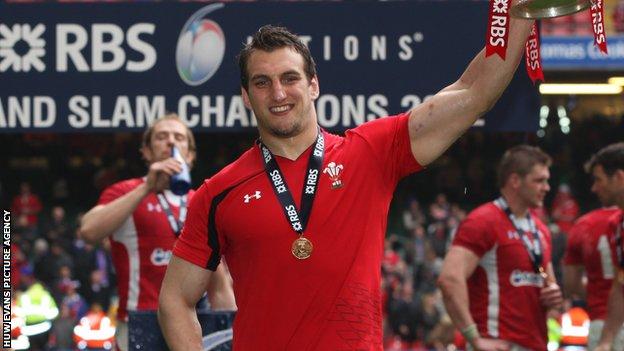 Wales' Grand Slam captain Sam Warburton admitted his tour of Australia is in the balance due to injury.

Warburton has not played since he suffered nerve damage to his shoulder during Wales' Six Nations win over France in March.

The Cardiff Blue will see a specialist again in May but admits hopes of leading Wales are "in the balance."

"I have to wait a bit longer," said Warburton, who saw a specialist in London on Tuesday.

"It's very hard to put a time scale on a nerve [injury]. They told me that at the start to be honest.

"He [the specialist] did say 'I can't be 100% certain because I've seen these things drag on and I've seen the recover very quickly', so wait and see really."

Warburton had already confirmed last week he would miss the Blues' remaining games of the Pro12 season.

"Every cloud has a silver lining," said Warburton. "They say they might as well make a positive out of this.

"I've been able to do some quite extensive rehab and the physios at Wales and the Blues have been fantastic over the last five weeks.

Wales face the Barbarians at the Millennium Stadium on 2 June before embarking on a three-Test tour to Australia.

Scarlets centre Jonathan Davies is a doubt due to a hernia problem, while regional team-mate Scott Williams is currently out with a shoulder injury.

"I was gutted when Jamie was told he had to have an operation because he's obviously one of our key players," added Warburton.

"But there will be opportunities to try out new guys on this tour.

"But at the end of the day it is not a development tour - we're going down there to win a Test series and it's going to be very competitive.

"Hopefully everybody can come through these regional games without niggles and we can take a full strength squad. I think we've got a great chance of winning down there."

Head coach Warren Gatland will also miss the tour to Australia as he recovers in New Zealand from a recent fall when he fractured both heels.

Gatland's assistant Rob Howley has been named caretaker coach for the Test matches against the Wallabies.