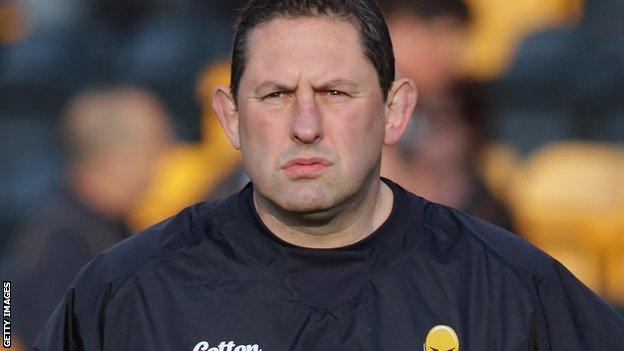 Davies, who is currently forwards coach with Worcester Warriors, has been linked with the Welsh region.

It is understood the former Scarlets and Wales Under-20s coach has been interviewed for the role above coaches Justin Burnell and Gareth Baber.

"I would be very excited if Phil was to join us," said Warburton.

"There's a lot of the boys who were under him at Under-20s at the Blues, they speak very highly of him."

The Blues have announced they intend to appoint a director of rugby to work with current coaches Baber and Burnell, who have been in charge at the region since November.

Wales skipper Warburton says the decision to appoint a new director of rugby is no reflection on the work of the coaching duo, who replaced Dai Young.

But the Blues flanker believes the appointment of a new director of rugby can give the young squad direction next season.

"Justin and Babs have done a great job," said Warburton.

"I've known them since I was 15, 16 years old and they brought me through the academy so I have a lot of faith in those two.

"I think with the young squad we've got next year I think it's a good decision by the Blues to bring in that director.

"A lot of us will still need guidance and direction."

Former Wales forward Davies, who has also coached Leeds, is favourite to get the Cardiff Blues job after he asked current club Worcester for permission to speak with the Welsh region.

Another former Welsh international, ex-Sale Sharks coach Kingsley Jones, has admitted he is interested in the vacant position.

Cardiff Blues have endured a disappointing season and several key players, including Gethin Jenkins, Martyn Williams, Paul Tito and Richie Rees, will leave at the end of the season.