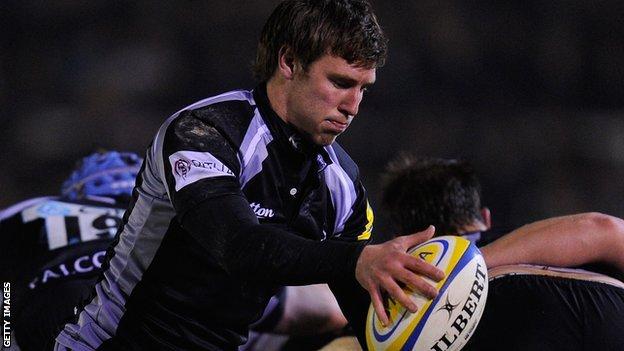 Exeter Chiefs have signed Newcastle Falcons scrum-half Will Chudley for the 2012-13 season.

Chudley who moved to Kingston Park from Bedford last summer, has made one Premiership and one European Challenge Cup start for the Falcons.

The 23-year-old has also made 16 appearances for Newcastle as a replacement in all competitions.

"Will is a guy we have been tracking for a number of seasons," said Exeter head coach Rob Baxter.

"We were initially looking at him when he was doing very well in the Championship with Bedford and we've followed his progress ever since he moved to Newcastle.

"He's a player who likes to make breaks and play with a bit of tempo, so he's just the kind of player we like here."

He's aware he's got to come in and fight for his place like any other person.

Chudley faces stiff competition for the number nine Jersey with Hayden Thomas, Kevin Barrett and Junior Poluleuligaga all contracted to the Chiefs for next season.

But Baxter says he is sure that Chudley will push his more established team-mates.

"We've not brought him here to sit on the bench and not play any rugby," added Baxter.

"He's aware he's got to come in and fight for his place like any other person.

"It's a short contract for him, but we know he's coming here to fight for something longer term.

Chudley says he is looking forward to having the chance to joining the Chiefs squad next season.

"I've played against Exeter a few times in the past and I know what a great club and great set-up they have," he said.

"Obviously the club have had a great year and next season promises to be even better for them, so it will be great to be part of it all."