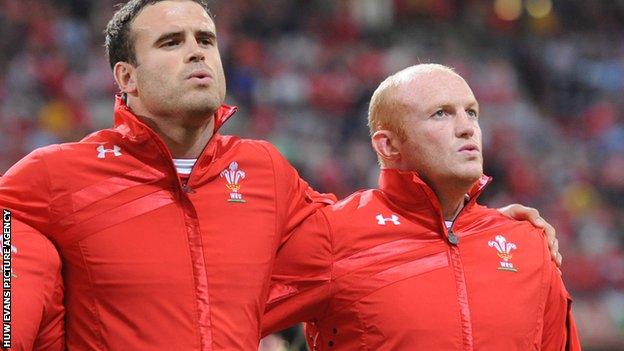 Jamie Roberts believes Martyn Williams will not want to be handed his 100th Wales cap for sentimental reasons against the Barbarians.

"I think Martyn Williams would be the first to tell you he wouldn't want to get picked for Wales unless it was on form," said Roberts.

Williams will retire from all rugby at the end of this season.

"International rugby is about being the best player in your position in the country," said Roberts.

Wales face the Barbarians in what has become an annual summer Test match at the Millennium Stadium on Saturday, 2 June.

But Rob Howley, Wales' caretaker coach, has already revealed he plans to send a batch of players for the three Test summer tour to Australia ahead of the Baa-Baas game.

Captain Sam Warburton looks set to miss Wales' summer matches and that means Justin Tipuric of the Ospreys will be favourite to fill the openside role against the Wallabies.

With Tipuric expected to fly to Australia before the Barbarians game, it means Williams could be a candidate to wear the red number seven jersey in Cardiff for a final time.

Roberts, who has played alongside Williams for the British Lions, Wales and Cardiff Blues, is in no doubt the double Grand Slam winner in 2005 and 2008, deserves to be a Welsh rugby centurion.

"I think he deserves 100 caps, certainly for what he has done for Welsh rugby which has been magnificent," added Roberts.

"He is certainly a player and person who everyone in Wales looks up to. He is a hero in Welsh rugby and it would be great for him to get 100 caps.

"It's all in the hands of the coaches and whether they select him.

"I am sure a lot of fans would want him to get 100 caps. He hasn't played for Wales this season."

Williams, who won his 99th Wales cap against Argentina in 2011, is only one cap away from joining Welsh rugby's only centurions Stephen Jones (104) and Gareth Thomas (100).