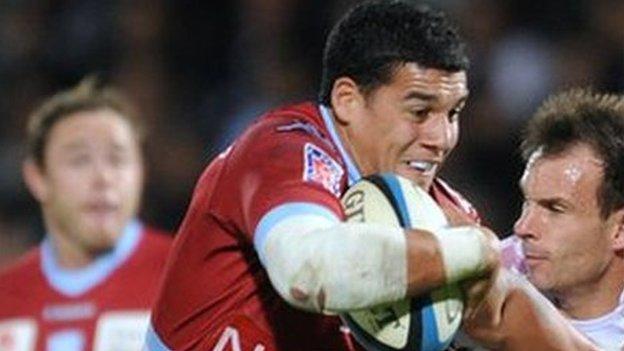 Cornwall-born Matavesi, 21, who has won five caps for Fiji, began his rugby career in the South West, playing first for Camborne, then Mounts Bay, before joining Exeter Chiefs.

He then left Exeter last summer to try his luck with Racing Metro in Paris.

"I'm very pleased to be coming back to the Premiership and show how much I have improved," said Matavesi.

"This is a big opportunity for me at Sixways and one I plan to take with both hands."

"Ravai Fatiaki has been fantastic the last six months with us and has really good potential.

"When you add that to the signing of Josh, we are pleased with our midfield options.

"Josh is a player we've been watching closely and he excites us with the way he plays. We already have some players within our squad who know him well from his Exeter days and Cornish connections.

"He's had a great experience at Racing Metro, where he has played Heineken Cup rugby, and is excited about his move to Sixways.

"He is somebody who is an attacking player, who plays with flair and will look to unlock defences, which is what we need to add to our game.

"Josh takes ball to the line, is good at offloading out of contact and, as a Fijian, he loves to tackle hard.

"Josh also gives us a kicking option in midfield or if he operates at full-back or fly-half. He gives us plenty of options."

Meanwhile, the Warriors have confirmed that three more players - Tom Arscott, Ben Gulliver and Richard Muagututia - are to leave Sixways this summer.

Full back/wing Arscott has made a total of 36 appearances for the club, scoring 16 tries, since joining the Warriors in 2010.

Lock Gulliver has made 13 appearances, including five in the Premiership, since being recruited from Cornish Pirates at the start of the season, scoring tries both home and away against Banca Monte Crociati.

Samoa international Muagututia joined the Warriors in September and has made six first team appearances.

"Both Tom and Ben have been unfortunate in that the opportunities they have had this season have been limited by the form and consistency of players in their respective positions," said Hill.

"We believe that Richard could yet have a bright future, but it is crucial he gains more game time and so hopefully we can help him secure a club in the RFU Championship and develop his game."