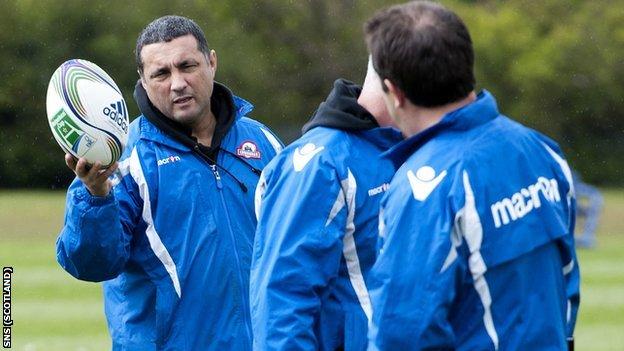 Edinburgh coach Michael Bradley believes the underdog tag "suits" his side ahead of their Heineken Cup semi-final against Ulster.

Bradley guided Edinburgh to their first ever semi-final in the tournament with a 19-14 win over Toulouse.

And now he hopes to cause an upset against the 1999 winners when the two sides meet in Dublin.

"The only thing I'll be asking our players to do will be to express themselves as best they can," he said.

"If they do that I think we're in with a fantastic chance.

We're a dangerous side. I wouldn't like to be playing us

"There'll be a fair amount of pressure on Ulster to get the win and they have to manage that expectation.

"It's not so prevalent in our camp. That's not saying we don't have the desire to win the match but we just don't have to deal with that issue.

"So, coming in as underdogs suits us fine. We're obviously very happy to be in the position to be competing at this level in the Heineken Cup."

Edinburgh have lost only once in this season's tournament but they have lost both meetings with Ulster in the RaboDirect Pro 12.

"If you analyse how we play the game, you can see that we're a very dangerous side if we get things right on the day and we're going in with that confidence," added Bradley.

"They have a very solid team mentality. They really work hard for each other. They're quite a physical side.

"A couple of mistakes will make a massive difference on Saturday. We're aware of that, Ulster are aware of it and you're in a semi-final so anything can happen.

"I'm not surprised in terms of the talent, the talent is there. We won a couple of matches by tight margins so you need that bit of luck to go your way and we've had that in the tournament.

"At the moment we have momentum, we have confidence, we're excited, we're a dangerous side. I wouldn't like to be playing us. That's no guarantee that we'll win but if we perform we've a great chance."