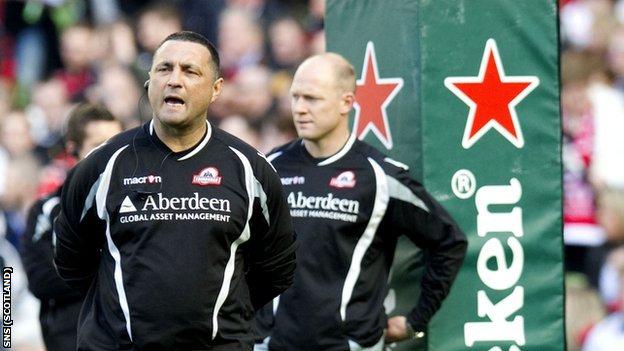 Edinburgh head coach Michael Bradley says his players have "a burning desire to win something" following their Heineken Cup exit.

The Scottish capital side lost their first semi-final in the tournament 22-19 to Ulster in Dublin.

We had chances to win the game

"There are areas we have to improve," said Bradley.

"There is young talent coming through and quality international players. Edinburgh Rugby has taken a positive step forward."

Bradley's side were well in the tie until kicked a 76th-minute penalty to open up a 10-point lead at 22-12.

Substitute Jim Thompson crossed late on and Greig Laidlaw added the conversion to reduce the arrears but it was too little too late.

"We are disappointed and a little bit frustrated," added Bradley.

"We had enough opportunities to build a bigger points total than we did.

"In the second half Ulster shut us down a little bit more. They stifled our ability to play attacking rugby.

"Ulster got the upper hand in the scrum but we had chances to win the game."