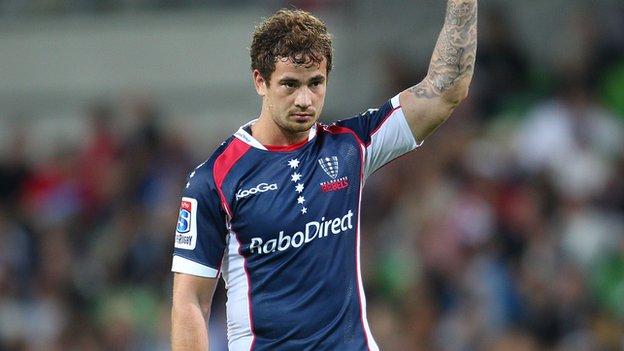 The 24-year-old was set to leave Melbourne at the end of the season after signing a three-year deal with the Sharks in March.

He said on Twitter: "Going to be sad to leave all my team-mates. Made some friends for life over here.

"Loved my time in Melbourne. The fans having been truly amazing. Thank you for all your support."

The former London Wasps man agreed a move to Sale several weeks ago and is hopeful of forcing his way back into the England squad.

However, he was expected to see out his commitments in Australia before joining the Sharks.

"I want to thank the club for being so understanding with my wishes and granting me a release to return to England," said Cipriani.

This is great news for Sale Sharks. Danny will be able to enjoy a rest period, along with his future playing colleagues

"I've made no secret of my desire to play for England again and I believe leaving now will give me the best opportunity to do that.

"I feel I have developed my game in my time in Australia and become a more complete player.

"I wish the Rebels every success in the future and should the opportunity ever arise again I would not hesitate to return."

Cipriani scored a club record 122 points in his two years with the Rebels, but was suspended by the club in May last year as a result of a breach of discipline.

"Danny goes with our blessing and we thank him for his contribution to our club during his time here," said Melbourne chief executive Steve Boland.

"Essentially the time is right for both parties to part company. The decision is amicable and we wish him all the best for the future."

He said: "Danny will be able to enjoy a rest period, along with his future playing colleagues. He will also be able to take part in full close-season preparations."