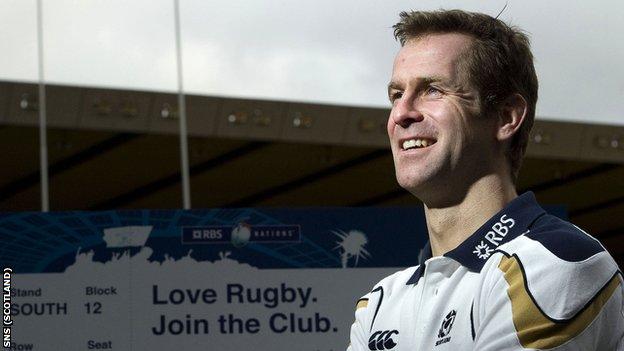 Chris Paterson will end his remarkable playing career on Saturday when Edinburgh meet Treviso at Murrayfield.

The 34-year-old full-back opted to retire from international rugby in December after 109 Scotland caps and 809 points - both records.

A club statement said Paterson "will take up a new non-playing role with Edinburgh and Scottish Rugby".

The announcement adds that further details of Paterson's new position will be revealed next week.

Paterson, who has had two spells with Edinburgh, either side of a stint at Gloucester, is one of 10 players leaving at the end of a memorable season for Edinburgh.

Jim Thompson will miss the Murrayfield send-off as the full-back is in the Scotland squad for the Glasgow 7s this weekend.

Edinburgh head coach Michael Bradley said: "Saturday will be a memorable match for a number of reasons.

"We'll bring the curtain down on an incredible season, say farewell to these fine players and, at the final whistle, look to the future and begin preparations to capitalise on this landmark year.

"It'll be an emotional day for fans and players alike, as they show their mutual appreciation for the role they've played for the club over the years.

"We've enjoyed an historic season in the Heineken Cup this year with a number of memorable matches here at Murrayfield.

"However, our form in the RaboDirect PRO12 has been a constant frustration, so this Saturday will be about drawing a line under that element of our season and sending these guys off on a high."