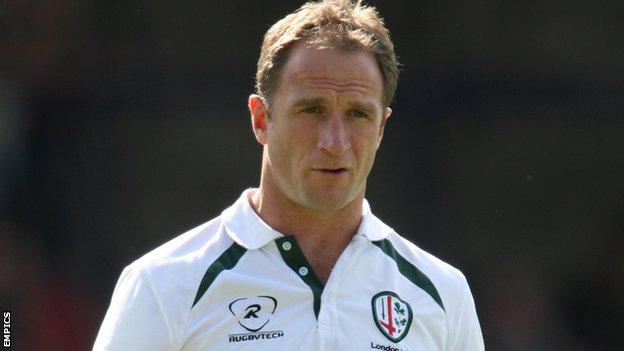 Catt will leave the Premiership club in time to take up his new role for England's South Africa tour in June.

Former All Blacks head coach Smith has turned down the opportunity for family reasons.

"Mike's experienced in playing in South Africa and this will be invaluable," said England head coach Lancaster.

Catt's role with England will be reviewed after the tour to South Africa, but Lancaster described it as "a great opportunity for him to put a marker down".

"Mike will clearly bring a lot to the attacking game but equally I will be expecting him to manage our exit sets, our kicking strategy, our organisation of set-piece defence," added Lancaster.

"I am sure he's more than capable of doing that."

He made his debut for England in 1994 and his 75 international caps included a crucial role in winning the 2003 World Cup.

"Mike has played at the top level and is highly respected," added Lancaster.

"He has done a great job whilst coaching at London Irish and we are looking forward to working with him on this South Africa tour."

Catt, 40, said he was excited by the new challenge after eight years with London Irish.

"There are some talented young players coming through and the chance to work with them for the Barbarians game and the tour is really exciting," added Catt.

"I'll be sad to leave London Irish and I want to say a huge thanks to all the players and coaches I have worked with since 2004.

"Toby Booth in particular deserves massive credit for what and how he has taught me. Thanks also to the supporters who have been brilliant over the last eight years and I will take away some lasting memories."

Smith has cited family reasons behind his decision to remain with the Waikato Chiefs after a weekend of considering the offer to join England.

"It was an incredibly difficult decision but ultimately I have decided to stay in New Zealand, mainly for personal reasons," said Smith.

"I took the job with the Chiefs so I could move nearer to my elderly parents. I have travelled the globe with rugby for the last 15 years and I want to fulfil my commitment to be closer to them."

"I'm clearly disappointed but I fully respect his decision," he added. "I understand it. He's got strong family ties back in New Zealand."

Meanwhile, BBC Berkshire understands Justin Bishop will cease to be defence coach for the Exiles at the end of the season. Bishop made 279 appearances in 10 years at the Madejski Stadium.