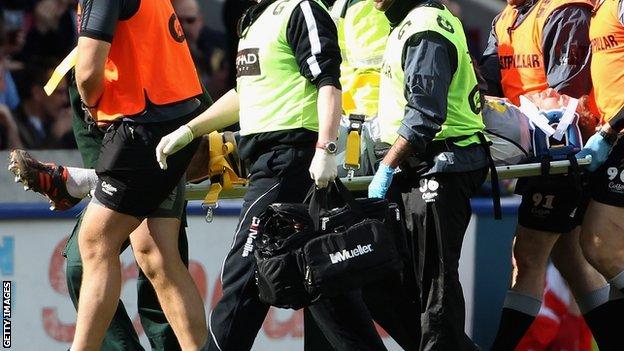 Leicester flanker Tom Croft will miss the England tour of South Africa in June due to a neck injury.

The Tigers forward was taken off on a stretcher in a neck brace in his side's victory over Harlequins on 21 April.

An England spokesman said the injury, which Leicester boss Richard Cockerill had stated was not serious, rules him out of contention.

Croft was a key member of England's Six Nations squad, scoring the winning try in the victory over France in Paris.

He has also been an integral part of the Leicester club's push for their 10th Premiership title.

In the match against Harlequins, Croft was treated for six minutes on the pitch after injuring himself in an attempted tackle on fellow England forward Nick Easter.

Cockerill said after the game that Croft had been checked in hospital and "his neck's been cleared".

He added that the flanker had suffered "just a sore shoulder because he caught it at the extremes".