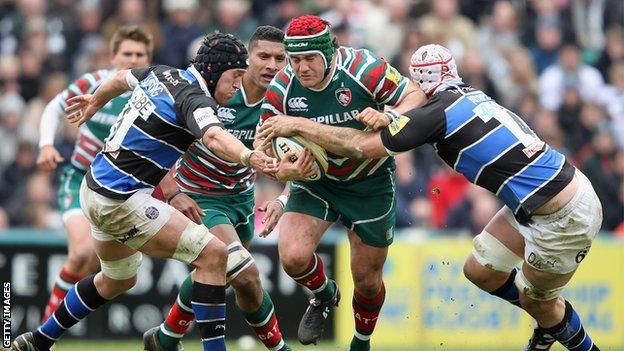 Leicester secured second place in the Premiership and set up a home play-off semi-final against champions Saracens with a comfortable win over Bath.

A Toby Flood penalty separated the teams in the first half before the England fly-half left the field.

Billy Twelvetrees and Olly Barkley kicked a penalty each after the break before Anthony Allen's converted try gave Tigers some breathing space.

A penalty try and score from Horacio Agulla put the result beyond doubt.

Tigers' victory was marred by the loss of fly-half Flood, who was on crutches after the game.

The England man had been in fine form and his absence will be keenly felt by both his club and his country if the injury proves to be serious.

The manner of Tigers' victory was somewhat bittersweet given that the architect of the win was Twelvetrees who has agreed a move to Gloucester next season.

England scrum-half Ben Youngs did not make the starting side and was replaced by Sam Harrison but he missed little in a first half in which defences dominated.

After Flood had given the hosts a 3-0 first-half lead, Twelvetrees exchanged penalties with Barkley after the break.

A beautiful break by the 23-year-old Leicester man created the first try when, after he had put Agulla away on the right, he took the ball at first receiver to flick an inside pass for Allen to crash over from close range.

Bath turned down a shot at goal and lost their five-metre line-out before Twelvetrees extended the lead to 16-3.

Dean Richards went under the posts for a penalty try on 71 minutes after a repeated collapsed scrum by Bath, Twelvetrees converting.

And the former Bedford man turned creator again with the scoring pass to Agulla two minutes from time after a Tom Youngs break.

Twelvetrees converted to end with a haul of 10 points and seal a win that sets the Premiership finalists of the last two years against each other at Welford Road where Saracens ran amok back in September.

"[On facing Saracens in the semi-final] Every time we've played them here they've done pretty well it's been a tough game.

"They're a good side, they're very physical and they've always played well against us.

"Today was job done, it was not a great spectacle, it was all about winning.

"Skivington had a stiff back, Ben Youngs had a tight hamstring and could have played. If we were playing Saracens today all of those guys would have been playing. "