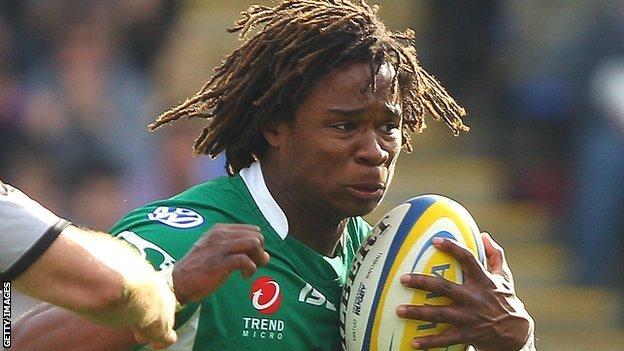 London Irish ran in six tries to jump above Gloucester and finish seventh in the Premiership.

Four Tom Homer penalties helped Irish to a 12-3 lead, although that was reduced by Tom Voyce's try.

Darren Allinson, Sailosi Tagicakibau and Jonathon Joseph then went over as the hosts led 34-11 at half-time.

Marland Yarde scored two second-half tries, while Delon Armitage also went over, and at the other end Voyce scored his second try of the match.

It was a good send-off for England-bound attack coach Mike Catt, but the game was marred by the sendings off of Irish's David Paice and Gloucester's Jim Hamilton seven minutes after the break.

The pair had already been sin-binned for exchanging punches by referee Dave Pearson, but when they elected to hold round two of their bout on the way to the touchline it sparked a mass confrontation and they were both shown red.

Exiles took the lead through Homer's first penalty of the game, while Freddie Burns responded within two minutes.

Homer, this season's top points scorer in the Premiership, then successfully kicked three penalties, but the visitors hit back to score the first try of the game.

Strong running from centres Jonny May and Mike Tindall, set up full-back Voyce in the right-hand corner.

Homer scored his fifth penalty and Joseph and Armitage combined on the left touchline to find Allinson who stepped inside to score.

Tagicakibau and Joseph scored tries in the final four minutes of the first half to open up a 23-point lead.

After the punch-up seven minutes into the second half, Gloucester temporarily found themselves down to 13 men when Tindall was singled out for pulling back a support runner, with Homer kicking his sixth penalty.

Yarde added two more tries for the hosts, with Armitage's score sandwiched in between, while Voyce went over for Gloucester in the closing seconds.

"Jim Hamilton [who was sent off] has got a lot to answer for, it's not the 1970s. It was very disappointing, it was a blight on the game.

"Hamilton was the instigator and we have David Paice possibly with concussion and a dozen stitches in his head. As a captain of the Gloucester team Hamilton's behaviour was unacceptable.

"He is a Test player but I would be surprised if he plays any Test footy this summer, because it was a disgrace what he did today."

"It was an embarrassing performance and we lacked discipline.

"We dropped off too many one-on-one tackles and there were too many yellow and red cards. It was an unacceptable performance all round.

"It's the performance that counts and today's wasn't acceptable for any person who wears a Gloucester jersey and I can only apologise.