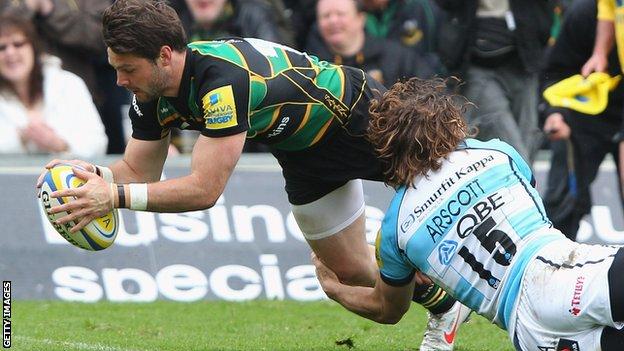 Northampton made sure of their place in the Premiership play-offs with a final-day regular-season win over Worcester.

Both sides scored tries in the first seven minutes as Chris Ashton went over for the hosts, Josh Drauniniu replying for Worcester two minutes later.

Ben Foden went over to give Northampton a 17-7 half-time lead, while Kai Horstmann's try closed the gap.

Paul Diggin, Teimana Harrison and Alex Waller went over in the second half to secure fourth place for Northampton.

Saints will travel to Harlequins in the play-offs as they reached the semi-finals for a third successive year.

Saracens-bound Ashton took only five minutes to mark his final home appearance with a try, finishing off with a trademark swallow dive for the final time in a Northampton shirt at Franklin's Gardens.

Ashton lasted only 19 minutes before going off injured, but Northampton director of rugby Jim Mallinder is hopeful the winger will be fit for next week's semi-final at Harlequins.

Mallinder also explained that the player was suffering from a bad back and had not injured himself doing his trademark dive when scoring.

Tom Arscott set up Drauniniu to score Worcester's first try of the match soon after Ashton's score but Shaun Perry was yellow-carded three minutes from half-time for hands in the ruck in front of his own posts and the hosts took full advantage.

Stephen Myler kicked the resulting penalty and the extra man paid dividends for Saints when Foden jinked in for their second try.

After converting the try to give the hosts a 10-point half-time lead, Myler's penalty put Northampton 20-7 ahead five minutes after the break.

A Worcester ruck forced Northampton back over their own line and Horstmann, who is moving to Exeter, got the finishing touch for a try converted by Danny Gray.

Ryan Lamb replaced Myler and two minutes later scored a penalty and also converted Diggin's try, after he sprinted in for Northampton's third.

New Zealander Harrison scored his first try for the Saints, while replacement prop Waller went over for their fifth.

"We made a couple of mistakes in the first half but in the second half, thankfully, we took control and in the end won quite comfortably.

"[Man of the match] James Craig's overall game was very good. His line-out contribution was immense, he got round the field, he was hitting lines in attack, making good tackles and he'll only get better.

"James Downey and Roger Wilson are two fantastic lads. I brought them in and I think they've been two of my best signings.

"Harlequins have been the most consistent side throughout the season but we're playing well, and if we play to the top of our game, it'll give us a good chance."

"We were under the pump for the first 20 minutes, but then we turned it round a bit and played some good stuff and scored a fantastic try.

"We had them rattled and had a penalty in front of the posts which we had to kick at goal, and we didn't and in the last 20 minutes we were chasing shadows."