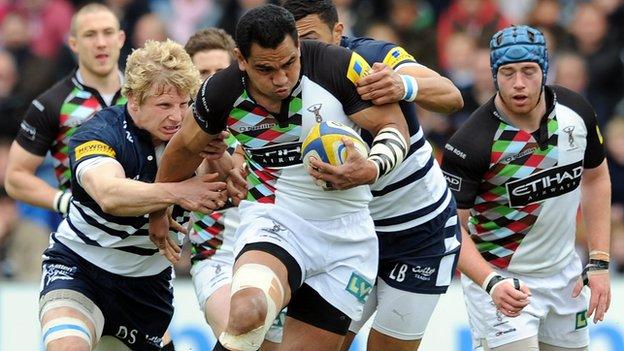 Harlequins beat Sale to finish top of the Premiership and secure a play-off semi-final against Northampton Saints.

Danny Care dived over a pile of bodies to give Quins the lead, Nick Evans converted and then swapped penalties with Sale youngster Tommy Bell.

Mike Brown weaved through Sale's defence for Quins' second try and Evans added the extras before the break.

Evans added another three penalties but Sharks fought back with a fine solo try by Will Addison.

The young Sale side started their last game at Edgeley Park, before their move to Salford next season, well and had an Addison touchdown ruled out for a push on Brown.

The Sharks were full of running but could not match Quins' experience and strength in the set-piece.

The hosts spurned a number of chances and were made to pay when Care leapt over a ruck to open the scoring.

Evans converted and after Bell pulled three points back the New Zealander re-established a seven-point margin.

Brown benefited from George Lowe's break but was shepherded into touch before breaking through shortly after.

A flat pass saw the England full-back accelerate onto the ball and cut his way through some wayward defence to go over.

Quins continued to threaten after the break and Evans's boot stretched their lead to 21-3 before Nick Easter saw yellow.

The talented young Addison took the ball in midfield and skipped past two defenders to race away from 50 metres out.

Bell converted and despite a late rally from the hosts, Evans had the last word from the tee.

The result, combined with Bath's loss at Welford Road, means Sale will compete in the Heineken Cup next term.

[On his squad selection] "England are hosting the World Cup in 2015. Up here, we're proud of players who want to play for England and we've got a lot of ambition.

"Today was a wonderful chance for our lads who have played quite a lot of games this year, but been in the shadows as well, to play in the first team in front of a full house against a top side."

"I think we were accused earlier on in the week of fielding a weakened side by Premier Rugby. I think Premier Rugby should take on the bigger issues of avoidance of salary caps by some clubs.

"We picked our strongest side, contrary to what Premier Rugby and various other people have accused us of doing.

"To put 23 English players out in one game is remarkable; I think we should be applauded for it."

"To be at the top of the leaderboard on 17 September and to still be top on 5 May takes a heck of a lot of work from a lot of people at the club.

"We've achieved nothing, but it's a nice little thing to have done for everyone involved at the club and we're looking forward to next week against Northampton.

"You could see there was a little bit of tension there. We kept them at arms length once we got into a 21-3 lead. We almost stopped playing rather than ramming home the opportunities we had."