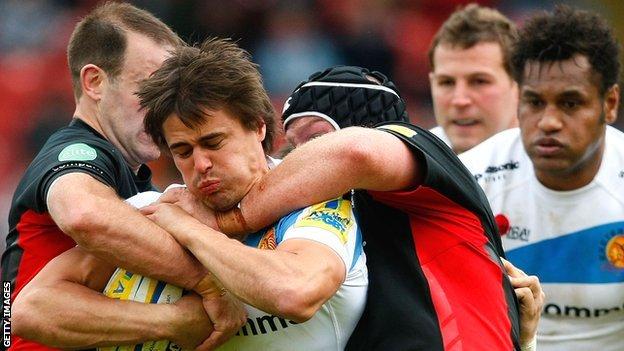 Exeter missed out on the play-offs with defeat at Saracens, coupled with

Helped by Tom Johnson's try the visitors led 10-9 at half-time, but within two minutes of the restart James Short went over to put Saracens ahead.

Tries for Rhys Gill, Alex Goode and Charlie Hodgson then put the game out of reach for the Chiefs.

Chris Budgen and Matt Jess went over in the last six minutes but Exeter had to settle for fifth place.

The bonus-point victory was not enough to secure reigning Premiership champions Saracens a home semi-final in the play-offs due to and they now face a difficult trip to the Tigers next weekend for a place in the final.

The visitors went into a third-minute lead thanks to Gareth Steenson's 35-metre penalty, while Owen Farrell, who minutes earlier missed a kick from 45 metres, levelled the scores at 3-3.

Tom Johnson forced his way over to give Exeter the lead, with Steenson kicking the extras, before two successive Farrell penalties closed the gap to a point at half-time.

Saracens scored two tries within seven minutes after the break. First, they were gifted a try as Bryan Rennie's chip ahead fell straight into the hands of Short, who raced 80m unopposed to score.

Gill then charged through some weak Exeter tackling, with Farrell converting both tries and then kicking another penalty to stretch the home side's lead to 16 points.

Great work from Hodgson and Farrell created a try for Goode, before Hodgson produced the moment of the match as he waltzed through a gap in the visitors' defence before rounding replacement full-back Ignacio Mieres, while Farrell took his tally to 20 points in the game.

Exeter scored late tries from Budgen and Jess, but it was too little too late.

"We were superb in the second half but the first half was very tough.

"We made a few errors, Exeter are a very good team and targeted this match.

"They took a bit of wearing down, it took some time but I'm very pleased.

"Leicester are in really good form over the past two to three months.

"We have had some great contests with them recently and this will be another one."

"Let's be positive about this season as a whole, don't let the second 40 minutes create any cause for concern.

"Tactically I got it a little bit wrong, I probably got a bit carried away with the way we've played over the last few weeks and encouraged the boys to attack things and be really positive.

"The players deserve a good break now and deserve any accolades they get over the summer if any of them get selected for the summer tours.