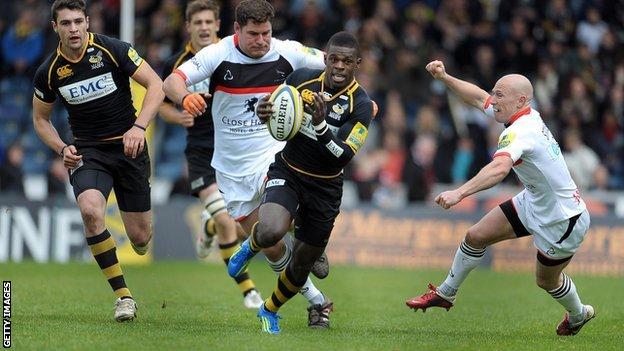 Newcastle finished bottom of the Premiership despite a 14-10 win over Wasps at Adams Park.

The Falcons may yet avoid relegation if the Championship winners do not meet the Premiership entry criteria.

A Nicky Robinson penalty broke a lengthy stalemate before Christian Wade broke away for his 10th Premiership try, which Robinson converted.

James Fitzpatrick went over for Falcons after the break before Peter Stringer's late score but it was not enough.

The result means Newcastle must now hope that either Bedford Blues or Cornish Pirates, neither of which have applied to join the Premiership, win the Championship play-offs.

Were that to happen, or if the other two Championship semi-finalists, Bristol or London Welsh, fail to pass the Premiership's audit and go on to win, the Falcons would remain in the top flight.

With so much at stake on the day both kickers started nervously as firstly Jimmy Gopperth and then Robinson missed shots at goal.

Wasps enjoyed the better attacking play as they looked to work their wingers Tom Varndell and Wade into the game but Falcons' defence was a match for them.

With half an hour gone and no score at either end the pressure began to mount on both sides with line-outs going astray, and charge downs and turnovers aplenty.

Wasps had the upper hand at the scrum and a 35th-minute collapse gave Robinson another shot at goal which he converted from wide on the right.

With less than two minutes to the interval came the play that broke Falcons' hearts.

Haughton, who was superb at full-back, produced a mazy break that ended with Wade accelerating into the right corner - Robinson converted to make it 10-0.

The Falcons, who needed to at least win by 24 clear points before kick off to avoid finishing bottom, came out for the second half with a mountain to climb.

They toiled, but when Ben Broster was sin-binned it gave the North Easterners faint hope.

Fitzpatrick struck soon after with a thrusting charge over Wasps' line, despite Joe Launchbury's tackle, and Gopperth was on song from the tee.

Robinson missed a penalty attempt and Falcons failed to build on their one-man advantage although they did come close before Richard Birkett's crunching tackle snuffed out the attack.

With the clock running down tempers flared on both sides and Tim Swinson crashed over for the Falcons but his effort was ruled out.

Stringer made amends when he dotted down with five minutes to go but the Falcons, who have been rooted to the foot of the table all season, ultimately came up short.

"It is a very emotional day, and the consequences are very upsetting.

"My goal when I came to Newcastle was to keep them in the Premiership. I couldn't control the consequences today.

"The smart money will be on [incoming boss] Dean Richards inheriting a squad destined to play Championship rugby."

"It is a little bit of a funny feeling, but we have done our job in terms of staying in the Premiership.

"The season, especially since October, has been hugely difficult, and I don't want to go through another one like it. It has been very draining.

"But things are looking far more positive - the future is looking brighter."