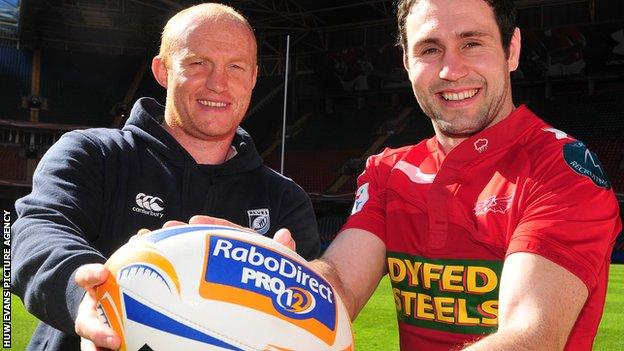 Martyn Williams says international team-mate Stephen Jones can be considered one of the legends of the Welsh game.

Fly-half Jones is likely to make his final appearance for the Scarlets in their Pro12 game against Cardiff Blues on Saturday.

Jones will join London Wasps and Williams has paid tribute to the record Welsh cap holder.

"He should go down as one of the legends of the Welsh game," he said.

"He's been unbelievable since he's been playing [in] one of the most difficult positions anyone can in Wales, the number 10 jersey.

"To go on and become the most capped player of all time in Wales is an unbelievable feat. As he is on and off the field, he's a great influence and an unbelievable role model for anybody.

"It's a shame he's leaving Wales and not plying his trade in Wales but I suppose it's Wasps' gain.

"Full credit to him, he can definitely play for another two or three seasons and I'm sure he will be a success there as well.

Jones made his international debut in Wales's 96-13 defeat by South Africa in Pretoria in 1998, going on to make a record-setting 104 appearances for his country.

The 34-year-old featured in his fourth World Cup in New Zealand last year and toured with the British and Irish Lions in 2005 and 2009, making six Test appearances.

He started his career with Llanelli RFC and progressed to Scarlets before a two-season spell in France with Clermont Auvergne before returning to Wales in 2006.

Scarlets team-mate Rhys Priestland has overtaken Jones at fly-half for club and country, but Williams believes the Aberystwyth-born player still has plenty to offer.

"To play 104 games for Wales at outside-half just speaks for itself and just shows what kind of character he is on and off the field," added Williams.

"Even though some of the knocks he's taken over the years he's kept going kept going and won his first cap I think in 1998 and still part of it in 2011.

"He might not have played that much game time during the 2011 World Cup, but his influence on the younger players is a great testament to the man.

"I'm not sure if he will be playing 10 or 12 or he could even play 15 - you never know with Steve - but it's going to be an emotional occasion for him," said Williams, who has 99 caps for Wales.

"Although he had a brief stint in Clermont, it's where he has played most of his career.

"Obviously it's going to make it even more difficult for the boys on Saturday to try and get a win down there."