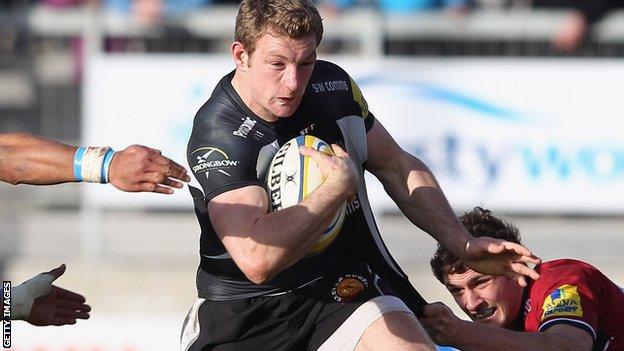 Lancaster was at Sandy Park on Monday and Baxter highlighted the performances of his side throughout this season.

England are touring South Africa this summer and Chiefs' head coach Baxter feels some of his team, who are fifth in the Premiership, should be picked.

"It's a 40-man squad going there and I'd like to think we'd get a few people in it," Baxter told BBC South West.

"But they've also got to show form week in, week out and probably over a longer period than one season.

We've made no bones about it, we're very ambitious and we want to have international players playing for us

"He [Lancaster] has started to become more aware of our players and I think he needs to be a bit more aware, but I'm bound to say that because I am a little bit biased."

With Tom Wood and Courtney Lawes among those ruled out of the tour, Exeter's forwards could be the ones to benefit, with England Saxons player Tom Johnson and James Hanks impressing for the Chiefs.

But Baxter also feels winger Matt Jess, scrum-half Hayden Thomas and full-back Luke Arscott should be given a chance.

"Our English players are through the pack, at scrum-half and with Jessie on the wing, they're the guys who have played a lot of rugby," said Baxter.

"It's primarily based on our form, with Hayden Thomas and Jessie, while Phil Dollman's starting to show some form and Luke Arscott's had a great season.

"We know who our EQP (English qualified players) are and they've played a big part in a team that's currently fifth in the Premiership, so they're doing something right.

"We've made no bones about it, we're very ambitious and we want to have international players playing for us.

"Any step we can take where the players can drive themselves into international recognition can only be good for them as players and us as a team."