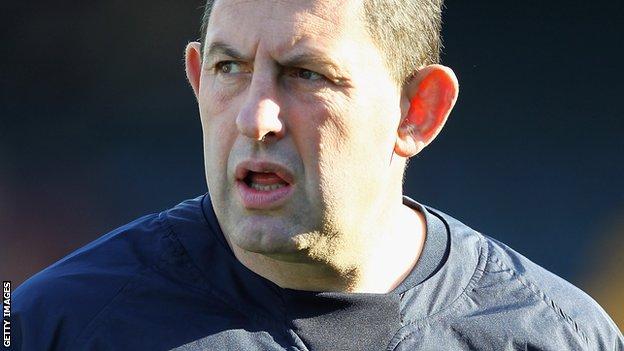 "We're sorry to lose him," said Warriors chairman Cecil Duckworth. "But we wouldn't want to stand in his way."

"We are delighted to have secured him," said Blues chief Richard Holland.

"He has shown during his time at the Leeds Tykes, when he took them from Division Three to the Premiership, that he can develop a young team and deliver success," added Holland.

"He is hugely knowledgeable about the game, extremely hard working and we look forward to having him with us for the forthcoming season."

Former Scarlets and Leeds coach Davies, 48, effectively succeeds Dai Young, who left for Wasps ahead of the 2011-12 season.

Former Llanelli and Wales forward Davies, who helped guide the Warriors back to English rugby's top flight a year ago, said: "It's a role I've been passionate about for a long, long time.

"The Blues cover a massive region, the biggest in Wales, and it's a great opportunity for a young group of players and staff to work hard in order to push the region forward and look to build upon the foundations that have been laid over the last eight or nine years, firstly by David Young and more recently, Gareth and Justin.

The Blues cover a massive region, the biggest in Wales, and it's a great opportunity for a young group of players

"Our aim will be to play attractive rugby and over time develop the Blues into a very competitive side in all competitions and ultimately win trophies and produce quality players to represent Wales."

The Blues go into the final game of their Pro12 season at the Scarlets on Saturday having seen their play-off challenge fail.

They reached the Heineken Cup quarter-finals, where they were thumped 34-3 by defending champions Leinster. But 12 players, including Wales internationals Gethin Jenkins and scrum-half Richie Rees, are leaving at the end of the season, and the region fear they will also lose new Wales wing sensation Alex Cuthbert.

The region were also criticised over their handling of Gavin Henson, who was sacked after an alcohol-fuelled disturbance on a flight as the squad returned from Glasgow.

Davies, who won 46 Test caps, led the Scarlets to their last Heineken Cup semi-final in 2007 before he was sacked the following season.

Before that, he led the Leeds Tykes from National League Three to Heineken Cup rugby and lifted the Powergen Cup at Twickenham in 2005.

He then went on to coach Wales Under-20 and Welsh Premiership side Cardiff RFC before taking up his role at Worcester.

But Davies asked Worcester last month for permission to speak to the Welsh region, who had announced they were seeking a new boss.

He had two years left on his contract at Sixways, but Duckworth has revealed that the Blues have agreed to pay "modest" compensation.

"I think we've got a degree of compensation, but I don't know the precise details," said Duckworth. "I think it's fairly modest. Hopefully everybody's happy.

"He sees that as progress in his career and obviously we wish him well, but very sad to lose him."