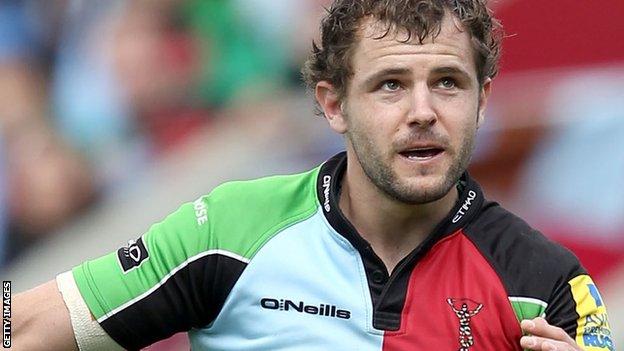 "I was very surprised and humbled to win this award," Evans said.

The nominations are voted for by professional rugby players and the news is a another fillip for England fly-half Farrell, following his Premiership award for discovery of the season earlier in the month.

"It's a massive honour just to be nominated never mind win this award, especially as it's voted for by your fellow professionals," Farrell said.

"It's so humbling to win as you can receive all the praise in the world, but to earn this kind of accolade from other Premiership players is fantastic."

Evans, who joined Harlequins from Auckland Blues in 2008, was one of three Quins players nominated for the award along with Robshaw, the current Aviva Premiership player of the year, and full-back Mike Brown.

"Harlequins is a big machine and myself, Chris and Mike are all just small parts of that - we can't do our jobs unless everyone else in the team is doing theirs," said the former All Black.

"I've got great respect and admiration for all the guys on the team and they've made my job easy this year and it's great to see so many Quins' players nominated. We've had a fantastic season so far and hopefully we can finish the job at Twickenham on Saturday [in the Premiership final]."

Elsewhere former Sale Sharks and England winger Jason Robinson was inducted into the RPA hall of fame, while Michael Claassens' 80-yard counter-attack score for Bath against London Irish was named try of the year.