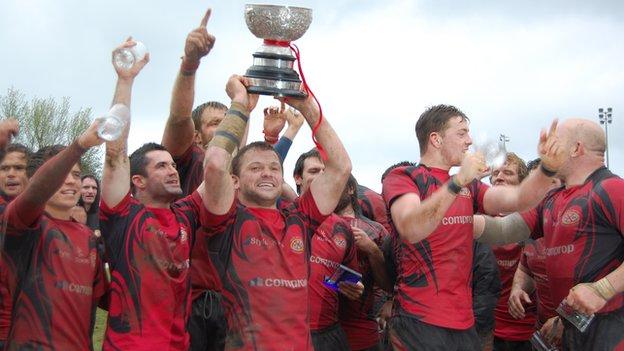 The visitors took the lead after nine minutes through a Ross Broadfoot penalty.

A penalty try followed and by half time Guy Thompson, Glenn Bryce and Nathan Hannay had crossed the line to give Jersey a 29-point advantage.

Guernsey dominated possession in the second period but could not unlock Jersey's solid defence.

The result was never in doubt however as Jersey stayed strong at the back to defy the Sarnians.

"I thought our defence was excellent and it's been like that all season," Jersey director of rugby Ben Harvey told BBC Sport.

"In the second half Guernsey had the wind at their backs and threw everything at us and we managed to defend very well.

"Guernsey showed why they've been a difficult side to beat this year but I thought the game was played in great spirit."

Meanwhile Guernsey boss Jordan Reynolds said his team, which won London One South, could still be proud despite losing the fixture.

"We had maybe 90% of the territory in that second half but just weren't clinical enough to score a try.

"We've got to be realistic because Jersey are a very good side but I think that second period capped off a really good season for us.

"The most important thing for us is the league but hopefully next season will be a good one and we'll use that as a springboard into the Siam Cup."