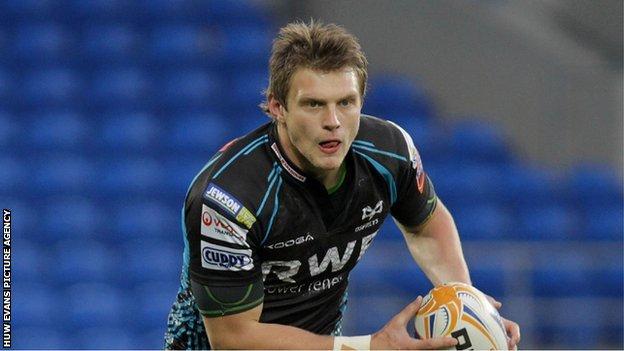 Dan Biggar has warned the Ospreys not to take their foot off the accelerator despite having qualified for the Pro12 play-offs with home advantage.

The Welsh region play their final league game at Aironi on Saturday knowing they face either Glasgow or Munster next Friday in the semi-finals.

Fly-half Biggar wants a win against the Italians, who have lost their licence and will be disbanded after the game.

"We're lucky enough to get a home semi in the bag already," Biggar said.

"So we're looking to keep our momentum going and we're expecting a real tough game.

"It'll probably be up there with the toughest game of the year, it's their last game and they've got everything to play for.

"We don't want to go into the game against Munster or Glasgow next weekend with a loss to Aironi on the scoreboard.

"With the team we've picked, we're looking to go there and put a good performance on."

Biggar has earned plaudits for his performances since the new year, turning around form that had seen him criticised in the first half of the season.

But the Wales international, who has seen himself fall down the international pecking order, says the Ospreys have started to click as a team.

"It's no coincidence that the pack is playing well and the centres outside me are playing well, it's an awful lot easier as a 10," Biggar added.

"I'm sure if you ask anyone who plays in that position, if the forwards are going forward and you've got good people running lines off you it's a pretty easy job as a 10 then.

"I'm enjoying my rugby and just hoping to keep it going but we won't be happy until we win this tournament at the end of the year."