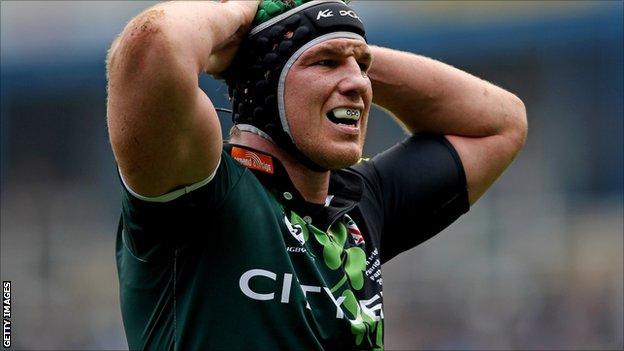 London Irish lock Bob Casey says he is preparing himself for an emotional day on Saturday as he leads out the Premiership side for the final time.

The Exiles take on Gloucester on the final day of the season in what will be Casey's last game before retirement.

And after 232 club appearances since joining in 2002, the 33-year-old admits there will be a lump in his throat.

"There is no getting away from the fact it is going to be a very emotional day," Casey told BBC Radio Berkshire.

Casey joined the club in 2002 from Leinster and has enjoyed 10 highly successful years at the club.

Bob Casey has been an inspiration at London Irish. Not only was he one half of a very effective second-row pairing with Nick Kennedy, he was a remarkable captain and inspired loyalty from those around him.

He may have won more caps for Ireland had he chosen to return home, but he has never complained and says he has no regrets.

He will certainly be remembered as one of the greats for the Exiles.

And he has revealed that Saturday's farewell has turned into a family affair and Casey admits he is desperate to end with a victory.

"It's a great honour to be captaining the club on Saturday," said Casey.

"I have 35 people coming over and I get to lead the team out with my two nephews and my niece as a mascot. I can't wait for it now.

"I'm really delighted, looking forward to it but most importantly I want to finish with a win. It will leave a bitter taste if we don't end with a win.

"Sport is a continuing process and teams evolve. It's really important we don't focus on everyone leaving; it is important we focus on leaving a really good example and finish the season in seventh and not ninth.

"There is a really good bunch of guys joining the club and it is important to focus on that.

"It's been a very special place from the players to the fans and I was lucky enough to lead them to some great highs in Europe and the Premiership.

"I am very proud to have captained London Irish, along with some legends of the game."

Meanwhile, London Irish forward Kieran Roche is to retire at the end of the season.

Roche, 32, joined the club in January 2003 from Saracens and has since made 179 appearances in both the second and back row.