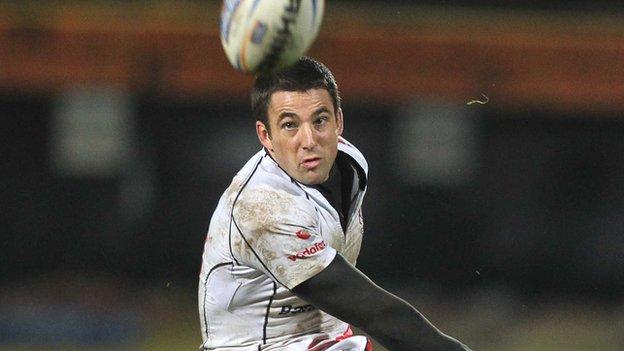 The 30-year-old, who still has a year to run on his Ulster contract, will join the Exiles on a three-year deal.

Humphreys has been inconsistent this season and failed to make the Ulster line-up for the Heineken Cup semi-final win over Edinburgh last weekend.

"I'm very excited to be joining London Irish. They play an attractive style of rugby that I am looking forward to being involved in," said Humphreys.

Brian Smith has certainly been busy since he returned.

First O'Leary, then Geraghty and Sa and now Ian Humphreys - these are all impressive and exciting signings to lift Exiles supporters' spirits as they have to say goodbye to club stalwarts like Armitage, Casey, Kennedy, Hodgson and Roche. Humphreys gives a different option at fly-half to Geraghty.

Or the two could line up together, with Geraghty at inside centre. And the prospect of having two Irishmen, O'Leary and Humphreys, at half-back will certainly please the club's supporters.

Geraghty, a product of the Exiles' academy, left the club for Northampton in 2009.

The 27-year-old spent two seasons at Franklin's Gardens before moving to France to play for Brive.

Humphreys rejoined Ulster from Leicester Tigers in 2008, having previously played for the Irish province at Under-21 level, where he captained the side during the 2002/03 season.

He has also represented Ireland at Under-19, Under-21 and A-level, and captained the Irish side at the Rugby World Cup Sevens tournament in Hong Kong in March 2005. Humphreys made his Ireland A debut against England Saxons at Ravenhill in 2007.

"It is fantastic to have Ian on board for the next three seasons. He will bring with him a wealth of experience and leadership qualities," said London Irish director or rugby Brian Smith.

"He is a constant threat with ball in hand and has a great ability to create space for his outside backs. He also has a fantastic kicking game.

"When I was previously at the club we tried to recruit Ian and Tomas O'Leary, now we have a pair of Irish half backs as good as any in Europe joining our current talent."