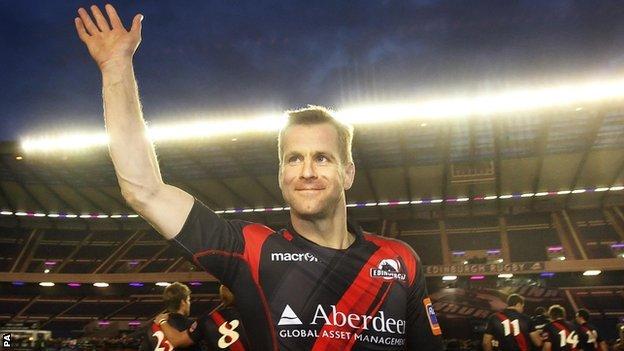 Chris Paterson marked the end of his playing career with a try in Edinburgh's victory against Treviso as both sides signed off for the season.

Dave Denton and Greig Laidlaw went over to help Edinburgh build up a 23-7 half-time lead, Ludovico Nitoglia crossing for the visitors.

Edoardo Gori claimed a third Treviso try but Tim Visser and Kyle Traynor ran in further scores for the hosts.

The bonus-point win does not change Edinburgh's league position with Michael Bradley's side finishing second-bottom, one place behind Treviso after they slipped behind Dragons.

Paterson, who will take up a new non-playing role with the capital club and Scottish Rugby, was thwarted as he made an early burst for the line as the hosts were penalised for a forward pass.

But captain Laidlaw soon kicked Edinburgh into the lead with his first penalty, Burton unable to emulate that with his maiden attempt minutes later.

Treviso were then pressed back by the home side's forwards and Laidlaw released Denton to go over, the skipper adding the extras and then another penalty.

Edinburgh were well in control and Laidlaw crossed under the posts before kicking his second successful conversion during Alessandro Zanni's sin-binning for the Italian side.

Treviso stemmed the tide towards their own try-line by getting a score of their own as Alberto Sgarbi unloaded for Nitoglia to touch down, Burton converting.

However, Laidlaw kicked his third penalty to create a 16-point gap at the turnaround.

The visitors suffered another yellow card early in the second half as Brendan Williams left the field for 10 minutes after a deliberate knock-on.

But the 14 men claimed their second try of the evening with Nitoglia crossing and Burton adding another conversion.

Paterson won the race to the line to touch down a chip from deep and the boot of Laidlaw added another two points.

Gori's try temporarily gave Treviso hope but Visser added his name to the list of try scorers before Traynor crossed on his final Edinburgh appearance, Laidlaw maintaining his flawless record with the boot to complete the victory.