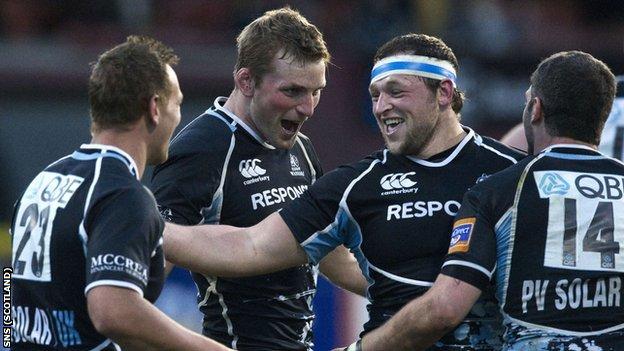 Warriors beat Connacht 24-3 at Firhill on Saturday to secure a play-off berth in Dublin.

"The players will be positive - this is our cup final. They're the best team in Europe and the most consistent, which is what you measure yourself against."

Momentum is coming, and it's going to be great next season when we move to Scotstoun, but for now, it's all about the next two games

And a John Barclay score from a driven scrum 10 minutes from time rewarded the hosts for a tenacious performance at Firhill.

"It was tough, they're a tough team" said Lineen, who will leave Glasgow this summer. "The main thing was the territory battle - we had to make sure we won that to keep them wide. "

We did that maybe a bit too much at times, but our defence was outstanding, which is what's held us in good stead all season.

"We've been favourite more often than not, which is something new for the players to learn, to have that tag and deliver on it."

The win means Glasgow finish fourth in the Pro 12 table and face table-topping Leinster away next week and Lineen admits it has been a very good season as the club looks ahead to a move to Scotstoun next season.

"As the head coach, you learn to rotate the squad and trust the players, but to be in the play-offs, it's a massive achievement for the club," said Lineen.

"When you think about where we are in terms of the league table, finance - we punch above our weight.

"But momentum is coming, and it's going to be great next season when we move to Scotstoun, but for now, it's all about the next two games."

And, looking ahead to next week's encounter in Ireland, Lineen is well aware of the threat posed by Leinster.

"Leinster are very good at squeezing games - they have 15 decision-makers in the game - they're tough to play against," added Lineen.

"But it's a massive highlight for me this season, to look at the players and see that they're more consistent, at another level - it's all about what they want to do now."