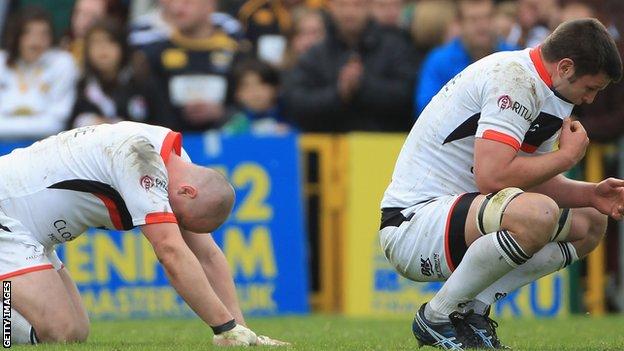 Interim coach Gary Gold believes Newcastle will bounce back to the Premiership next season if their relegation is confirmed.

The Falcons finished bottom despite their a 14-10 victory over fellow strugglers Wasps on Saturday.

"Harlequins, Northampton and Worcester have all improved as clubs due to relegation, and I would expect the same for the Falcons," he said.

"They are a great bunch of guys who were up for the fight."

Gold, who joined the club in January, added: "It was a very emotional day, and the consequences are very upsetting.

"We were fighting for our lives. At 10-0 down there was perhaps a reason to give up, but the players didn't.

"My goal when I came to Newcastle was to keep them in the Premiership. We had to throw the kitchen sink at it, but we had the belief we could do it."

Newcastle must now play the waiting game to see if they will be relegated to the Championship.

Bristol, London Welsh, Bedford and Cornish Pirates are all contesting the play-offs, although it is thought that only Bristol meet Premiership entry criteria.

They would also remain in the top flight if Bristol or London Welsh fail to pass the Premiership's audit and go on to win.

Whatever happens though Gold will not remain at the club as he passes the reins to Dean Richards, whose three-year worldwide coaching ban imposed for his part in the Harlequins 'Bloodgate' saga expires this summer.

"I wanted to hand the club over to Dean in a better shape, but I think the players have improved significantly," added Gold.

The South African is expected to remain in the Premiership as he is in line to take over at Bath, filling the vacancy created by Sir Ian McGeechan's departure.

He is expected to be unveiled by the club later in the week, where is set to be joined by former England defence coach Mike Ford with ex-London Irish prop Neal Hatley completing Bath's new-look coaching team alongside Brad Davis.